There’s a tangent to the argument defending the emergence of country rap that insists that country must evolve, that it cannot be hamstrung by tradition and idealistic attitudes about what country music should be. My reply would be that country has been trying to evolve for years, but those evolving elements have been pushed into the indie and underground realm as the mainstream devolves and looks outside of country’s big tent for commercial viability.

An excellent example of evolved country flying under the radar is Amanda Shire’s song “Ghost Bird” from her new album Carrying Lightning, and Amanda Shires herself. She might be best known for her work with the Thrift Store Cowboys, or collaborating with folks like Jason Isbell or Justin Townes Earle . The group DeVtochKa who once said “If you don’t like Amanda Shires…then you don’t like America.”) The willingness of Shires to play second fiddle when called for is a sign of humility and character, but over the years I have been most enamored with Amanda when she steps into the spotlight instead of side stepping it. 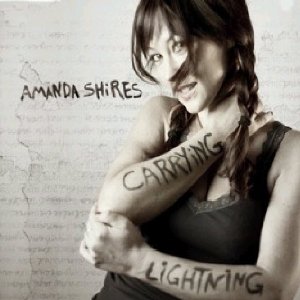 She is a fiddle player first, and a damn good one, but when employing a broad spectrum of measurements, Shires may have one of the most unique voices in country music by enacting such unbelievable and deliberate control with such an effortless air. Like Tammy Wynette in her prime, she can drop her voice out, or filter it through a grainy rasp for the accentuation of emotion. She combines this with a rapid-fire, almost yodel-like step down in tone at the end of phrases; a feat of vocal acrobatics that is as awe striking as a triple lutz. Her subtle but present southern accent peeking out gives it that extra bit of character and appeal as well.

“Ghost Bird” is a progressive, new-school country roots-based song that starts with an ambient music bed, similar to how the songs on Emmylou Harris’s album Wrecking Ball are constructed. The music itself holds a lot of emotion, and the human soul is further tickled by Shire’s voice and very well-crafted, subtle but not too abstract lyrics. The amount of mental imagery Amanda is able to create through this song is spectacular. Imagery is the song’s greatest asset.

Great songs are able to have universal appeal by the message of the song morphing to fit one’s unique life experience. In “Ghost Bird”, this isn’t just an attribute of the song, it is the foundation the song is built from.

I want to be able to say, “My name’s The Triggerman, and I like country music.” without having to chase it with qualifiers or explanations. Country is a big tent, and there is room in it to honor and preserve traditions, as well as for mainstream-appealing music, and yes, even country rap. But why can’t country music be something we can all be proud of, and something where the cream rises to the top? And if “Ghost Bird” was at the top of the country charts instead of Jason Aldean’s “Dirt Road Anthem”, it would be. Somebody please give me the argument why “Ghost Bird” is not commercially viable?

“Ghost Bird” is FREE on Amazon.

Excellent video as well that enhances instead of destroys the beautiful imagery of the song.