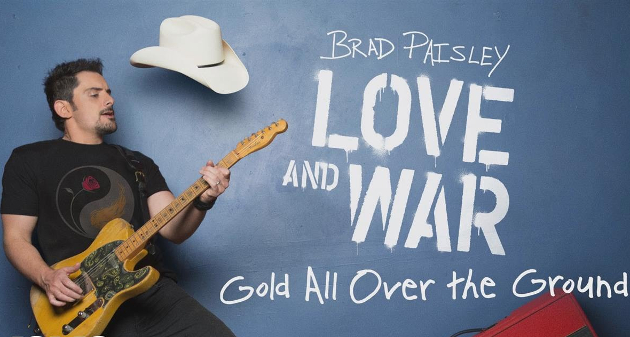 What is Brad Paisley to country music in 2017? Is he a hot shot guitar player? Is he mainstream country’s funny man? Is he a performer or songwriter first? Is he slowly morphing into what could be considered a modern-day traditionalist after the rest of the genre has shifted so far from its roots? How will history measure Brad Paisley?

All of these questions swirl around the Paisley name after his output over the last few years has ranged from traditional to contemporary, trend-chasing (“River Bank”) to awkwardly-political (“Accidental Racist”) and everything in-between. What Paisley may be ultimately known for still feels like it’s yet to be determined, and may be dependent on his next couple of albums, making them more important than just the mild output of an artist at the tail end of his career arc.

The truth is Brad Paisley is only going to have a few more years of mainstream relevancy left with the way things are going. He hasn’t had a real hit since 2011, and his last record Moonshine in the Trunk hasn’t sold 200,000 copies. These are usually damning metrics for a mainstream artist. Brad’s still doing fine, has made a ton of cash in his career, still draws well live, and if he plays his cards right, he can transition to a legacy act while he’s still on top. But the fundamental question that remains is, what is Brad Paisley’s legacy?

Ahead of his 11th album Love and War, Paisley has released multiple songs, including a lead single “Last Time for Everything” that leans on nostalgia, and features Brad Paisley’s blazing guitar playing and notoriously bad tone. But he’s also thrown us a curve ball by releasing the song “Gold All Over The Ground”—a starkly traditional tune with lyrics incorporated from a poem written by Johnny Cash.

The poem “Gold All Over The Ground” was first composed in March of 1967 about Johnny Cash’s wife June Carter, and was published in 2016 in the posthumous Johnny Cash poetry collection called Forever Words. The words are from an era and a perspective when chivalry and romance still thrived, and the poem carries a sweetness reserved exclusively for old lovers. Today’s irony-filled and self-centered perspective could never compose such a thing, and if it did, it would be laughed off as saccharine pap that’s too direct to be potent. Only the imposing stature of The Man in Black allows the modern perspective to see the beauty in the turn of phrase, and the sincerity behind Cash’s literary illustrations.

It’s not just Johnny Cash’s 50-year-old words, or the snippets of Cash audio bookending the track that make Brad Paisley’s “Gold All Over The Ground” traditional though. Tasteful mandolin, acoustic guitar, and a spirited steel handling the solo make “Gold All Over The Ground” one of the most traditionally-steeped songs from Paisley in some time. Brad also deserves credit for finding the right melody and phrasing to do Cash’s poem the proper justice.

Of course “Gold All Over The Ground” will not see the light of day as a single, and the fate of most album cuts in this age of streaming is to go relatively overlooked. All the more reason to release this song before the record proper, like Paisley did here, to give it a little chance to be heard and cherished as it deserves. Though all the right pieces are here for a great song, “Gold All Over The Ground” feels more good than great, but it’s still great coming from a major label-signed mainstream artist.

Don’t expect some big traditional shift or reset in Paisley’s upcoming album Love and War, but don’t expect him to go too far chasing trends either. Will Brad Paisley ultimately be a Hall of Famer? Will he still be hosting the CMA Awards in 10 years? How long will he be considered part of the A-list crowd of country stars? A whole lot of that is going to depend on how Love and War is received, which is all the more reason to show extra care with what you decide to include in the track list. Taking a Johnny Cash poem and lovingly composing it into a song exhibits that extra care.

Brad Paisley, Gold All Over The Ground, Johnny Cash