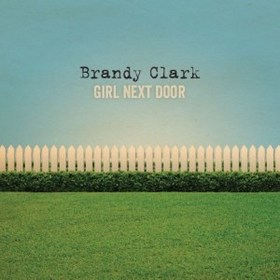 Brandy Clark is what passes these days for a modern elite-level mainstream songwriter. The problem is the modern elite-level mainstream songwriter is a much different animal than the troubled, disheveled cowboy poet scribbling rhymes on stained cocktail napkins as they strain to give the world some insight into their troubled mind through weary life-earned wisdom. Today’s songwriter is workshopping ideas with other professional wordsmiths on plushy microfiber couches with frappy fair trade brews steaming up sleek post-modern designed rooms, and Skyping brainstorming sessions during banker’s hours.

Brandy Clark is one of the revered and decorated ringleaders of the new school songwriting-by-committee process. Though the results may always be more appealing than the next tractor rap the “Peach Pickers” pull out of a corn field bro off, it sometimes can still smack more of product than the raw inspiration set to words country music used to be known for.

“Girl Next Door” is the lead single from Brandy’s sophomore album Big Day in a Small Town set to be released on April 1st, and above all else, the song is very “lead single-like.” The production crew tried to furtively slide this song past you as maybe a sensible country pop tune with even a slight underlying retro texture, but “Girl Next Door” is pretty straightforward disco country and looks to dovetail in with the danceability of many of today’s hits, regardless of how organic the sounds may be compared to some of its compatriots. Despite back-end production differences between “Girl Next Door” and the next big Sam Hunt single sequenced by some DJ, the creators are hoping Joe Q. Listener won’t notice; only critics and colleagues who will hopefully try to sugar coat the truth: “Girl Next Door” is an unadulterated bid for radio play.

Once again Brandy Clark’s motivation is to shatter the peaceful facade of suburbia with a more subversive message, while stirring in a bit of the ever-present “badass” persona that has so permeated female country in recent years. Don’t misunderstand, the writing of “Girl Next Door” is pretty slick, and the pentameter of the delivery is what catches the ear beyond the repetitive beat. But the song doesn’t really go anywhere beyond presenting a character the target audience can live vicariously through—one who doesn’t give a damn and is her own woman, telling men they better take her as she is and can’t be blamed if she can’t be trusted.

Instead of revealing self-doubt, regret, or loneliness, the girl in “Girl Next Door” is unapologetic, while any sort of story or baseline of what created this somewhat reckless persona is left untold. The white picket fence of the lyric video reinforces how this song is supposed to discredit social graces as societal conformity. Unlike other country music characters created in songs like Patty Loveless’ “That Kind of Girl” for example, there’s nothing really endearing or human about Brandy Clark’s anti-heroine. She’s not lost and yearning for love. There’s nothing that makes you sympathize or identify with her. She just seems like a girl with an attitude problem who doesn’t care that her house is dirty or her hair isn’t perfect because screw you.

There’s nothing exceptionally bad about “Girl Next Door,” it’s more about how unexceptional and predictable it is. In other words, it’s just yet another lead single for a new album upcoming in 2016, and it will probably mark the worst song of the entire effort.