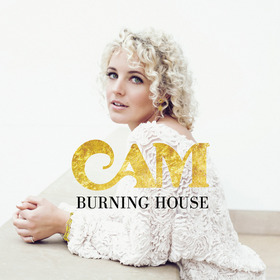 There’s no typo here. I didn’t forget the last name, or the second half of the first. Believe it or not, there really is a new female country artist condensedly known as “Cam,” and she’s creating quite a buzz around her new song, and her newish style that has some wondering if she will be the one to solve the problem of women with substance finding success in country music.

Signed to Artista Nashville, Camaron Ochs grew up on a southern California “farm” that boasted palm trees and a blue barn (according to the bio), and CMT describes her as walking a “romantic line between worldly wisdom and Disney charm.” Cam has written songs for Miley Cyrus and Maggie Rose, and she covered “Uptown Funk” at South By Southwest and released it digitally. So those looking for the authentic Southern Belle or the All-American Girl Next Door may want to keep looking. Though Cam’s approach does remain somewhat intriguing.

But frankly, I have absolutely no idea what to make of this artist. I’ve listened to her first single “My Mistake,” her current single “Burning House,” and her 4-song EP Welcome To Cam Country enough where I can repeat the words from memory, and I am no better off in understanding what the overall vision is for her music. But isn’t that the way it is for most upstart female country artists in 2015?

While male artists signed to major labels a couple of years ago are releasing their second LP and scoring #1 hits, female artists are stuck in a holding pattern, pushing out 4-song EP’s that are nothing more that tea leaf reading exercises, and offer no real effort at career traction or commercial impact.

Part of the problem appears to be that these labels aren’t signing up hit songs or established approaches, they’re signing up artists and hoping the music will develop in the future. If a female artist has the right look, the right disposition and voice, and she’s a songwriter to make a 360 deal a possibility, then they hope the rest will follow. It’s like the NFL team drafting a player with no ball skills simply because they have good athletic measurables, and they hope it will develop into something in the future. Meanwhile female artist with established sounds and vision are seen as too concrete to mold into a future success by the industry.

In the major label world of tight budgets and ever-shifting management structures, these female side projects get lost in the shuffle. Artists like Mikey Guyton and Cam are fighting an uphill battle if they are to find success. The reason artists like Kacey Musgraves and Miranda Lambert were able to launch careers is because they came to country with a confidence of who they were, and what they wanted to do. A willingness to compromise (which is what many major labels are looking for), ultimately (and ironically) can lead to a female artist’s struggle.

But Cam and “Burning House” do have an ace in the hole in the form of country music über DJ Bobby Bones. Isn’t it interesting that most all of the unknown artists Bones decides to champion are signed to major labels? But hey, as much of a ding bat as Bobby Bones is, at least he sees that there is a need to ask “who is next?” in country, and give artists like Cam a forum. In a vacuum of leadership in country, Bones has recognized that since he’s got a bigger audience than all the propaganda bullhorns in Red China combined, he might as well do something with it. Too bad his ear for country isn’t worth a damn. At least he’s trying, I guess.

Bobby Bones has been spinning “Burning House” and attempting to give the song and Cam some traction, but it’s still questionable if this will lead to any success. In the end “Burning House” is just way to sparse for today’s mainstream country listening ear. And though the artistic approach of the song is applauded, I just don’t hear it resonating with any specific demographic, even in the Americana realm. I agree that by the third time the chorus hits, the song discovers a slightly catchy element. Who knows, maybe it will find some sort of cultural chord like Gotye and become a sleeper hit, but my sense is it’s too erudite for the mainstream country audience, while still being too flat for the artistic crowd.

The other songs on Cam’s EP don’t offer much more help in figuring out what he have here. “My Mistake” has a little something that speaks to sort of 80’s or 90’s classic country in the harmonies, but it already had it’s shot as a single and fell short. I’m afraid the lyrical hook of “Half Broken Heart” doesn’t punch like it’s supposed to, and though the progressive approach to “Runaway Train” might be the most intriguing of the bunch, it still doesn’t offer much insight into what type of artist I’m listening to. That’s why EP’s are a terrible way to present music in many cases, especially at four songs. It’s just enough music to keep you quizzical.

There is something to Cam that’s a little different, and little more offbeat and artistic, and even rootsy in places. And though it’s a decent song, I’m afraid it’s going to take a lot more than “Burning House” to get the masses to pay attention.