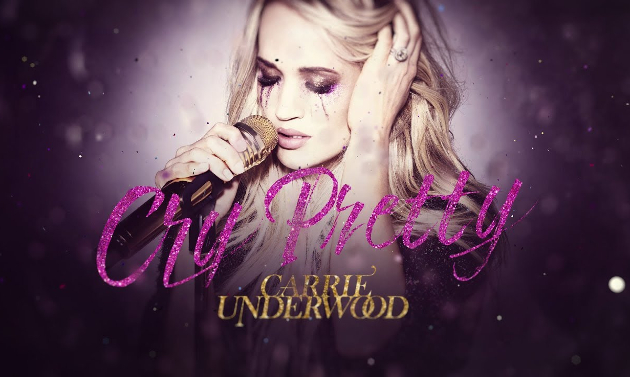 Once again in 2018, a major top-tier mainstream country music star has completely let down more traditional and independently-oriented country music fans who love to hate on today’s mainstream by delivering something more subsnative, more enriching, and overall more country than what we’ve been used to hearing on country radio for the last decade, veering the genre undeniably in the right direction, and leaving disgruntled country fans with few sour grapes to mash.

Carrie Underwood’s “Cry Pretty” is a bombshell of a waltz-beated ballad with a big presence of steel guitar setting the ambiance, well-written by Carrie and one of the best brain trusts in mainstream country music— Hillary Lindsey, Liz Rose, and Lori McKenna—and brought home by a monster performance by Mrs. Underwood herself, barreling out lines, hitting notes that leave most of today’s country singers registers behind, and making it hard to find a dry eye in the house after the last note hits.

“Cry Pretty” may not be as perfect as the mascara of the belle of the ball before she gets her heart broken. But it’s about everything you can hope a big mainstream pop country artist would deliver as a lead single after a long hiatus and in an era when prayers of returning country music to a more balanced style with embedded roots carried on big voices are beginning to be answered.

Carrie Underwood is the best singer in mainstream country, and one of the best singers of our generation. A song like “Cry Pretty” re-establishes that for anyone who has strayed too far away from that truth. It’s also true that with such a howitzer of a voice—and how Carrie Underwood has the confidence to take it to incredible heights—it can be too heavy, and too rich for some sets of ears. But the talent displayed should be something universally recognized.

“Cry Pretty” is still solidly pop country, just as much reminiscent of what you might find traditionally on a pop or R&B station as you would a country one. The beginning beat is a little too indicative of the electronic world, and perhaps it would be better if the guitar solo was handled by someone sitting on a steel throne as opposed to standing behind a Stratocaster. But it’s a far cry from the last song she released, NBC’s Super Bowl anthem “The Champion,” which was luckily never sent to country radio.

It takes a special craft not just to deliver a song like this, but write and produce it in such a way that it creates a runway for a voice like Carrie Underwood’s, and then a spotlight as it soars. Something else interesting to note is Underwood herself is credited as a producer—a rarity for her if not the first time ever. Worries about co-producer David Garcia’s involvement (he regularly works in the Christian music realm about also produced Bebe Rexha’s “Meant To Be”) can be chalked up to nervous anxiety. Certainly a more country-oriented producer might have taken “Cry Pretty” in a different direction, but in the era of busbee and Ross Copperman, that’s as big of a dice roll as any.

About the only bad part of “Cry Pretty” is the media once again stamping it with the stock plaudit of “empowering” when it’s anything but. Not everything from a woman in the Trump era has to be empowered. Instead, it is the vulnerability of the writing, the imagery, and performance of “Cry Pretty” which makes it inviting and emotive.

Carrie Underwood and songs like “Cry Pretty” will never be the cup of tea of many of country music’s more traditional fans. But it’s a far cry from the terrible pursuits of the Bro-Country era that now feel far in the past, and are quickly being replaced by a regime of more expressive, heartfelt, and enriching songs closer akin to country’s roots, and something you can’t call at least a curve in the right direction.