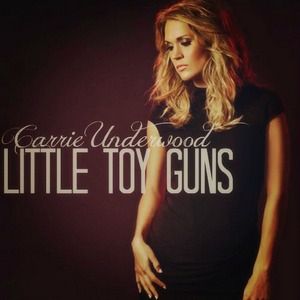 Carrie Underwood’s new singles being released as part of her recent Greatest Hits package have come at a fortuitous time for country music and Carrie, as country music appears to be transitioning away from Bro-Country, and looking for female leadership. “Something In The Water” was everything Carrie Underwood and country music needed it to be, and scored the powerful impact any label and artist must hope for a lead single to land. “Little Toy Guns” comes in as a solid followup, maybe not destined to score the same big successes, but will keep Carrie’s resurgence extended.

“Little Toy Guns” is not country, and it’s not even pop country. It’s a pop rock song, with any and all country elements unceremoniously left on the cutting house floor, if they were ever included in the first place. This isn’t a strike against the song itself; it’s just relevant to point out for a song from a country artist, being released to country radio. But “Little Toy Guns” is in no way out of bounds of what we’ve come to expect from Underwood in her career. In fact it’s right down her alley of reaching for highly moving and potent moments that wrench at your heart while serving as a vehicle for her powerful voice. “Little Toy Guns” accomplishes all these goals admirably.

Told from the perspective of a young girl facing the emotional toll rendered from listening to mommy and daddy fighting, “Little Toy Guns” puts the listener in a place most any human from an American family has found themselves in, yet we seem to be unable to extricate ourselves from replicating this same foolish and unfortunate behavior with our own families as adults. There’s something so criminal about how anger blinds one to the wisdom life has worked so hard to instill in us from a tender age. Parents turning their ire towards each other, especially within earshot of their kids, and the entire legacy of the broken family, seems to be one of the elements at the very heart of why humans are so eternally flawed.

Hats off to Carrie Underwood and fellow songwriters Hillary Lindsey and Chris DeStefano for tackling such a difficult subject, and being able to represent the emotional quotient present in this unfortunately too common occurrence with such understanding. But like with so many of these emotionally-wrenching songs, subtly is replaced with dramatic grandstanding and over-sentimentality. Teary-eyed moments are so hot right now in popular culture, evidenced recently in the parade of Super Bowl adds that have transitioned from light and fluffy humor-filled snippets to shots of weeping humans looking to elicit the same emotional response from the audience. Though emotionalism can be powerful, it can also be as shallow and opportunistic as over-sexualized content or silly humor in certain instances.

Though the setting of the video for “Little Toy Guns” is sort of this fantasy of the mind overlayed upon real life, the musical approach to the song is fairly unimaginative. There’s nothing offensive about it, but it lays down in the safe zone of sonic tropes from a mainstream country world that’s housing the refugees of mainstream rock in the aftermath of the implosion of that format. The echoing of Carrie’s lines in the chorus will come across as caustic to some ears; a bit too superfluous and busy, not letting the heart of the song breathe properly. But for other listeners the echoes will represent one of the more catchy elements of the song.

You appreciate the effort, and can’t find it offensive unless you’re being a little to over-sensitive yourself, but “Little Toy Guns,” despite its strengths, carries a little too much baggage to label it anything beyond “okay” or “better than Bro-Country.” Nonetheless, with the strength of Carrie’s built-in appeal and the poignancy of the track, it can be expected to fare fairly well amongst mainstream listeners.