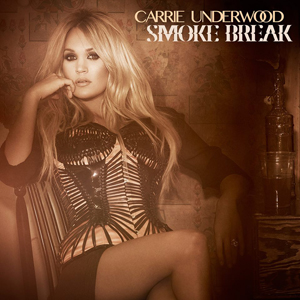 In a much-anticipated and highly-publicized announcement early Thursday evening (8-20), Carrie Underwood revealed she would be releasing her fifth studio album called Storyteller on October 23rd—her latest full-length release of original music since 2012’s Blown Away. Underwood also released Greatest Hits Decade #1 in December of 2014, which included two new singles, “Something in the Water” and “Little Toy Guns.” The Greatest Hits release and new singles helped tide fans over as Carrie Underwood gave birth to her first son Isaiah, and took a slight hiatus from the public eye to focus on her family.

As part of the new album announcement, Carrie Underwood also revealed the first single from the new album called “Smoke Break.” A fairly raucous, country rock song with a sound wide enough to fill an arena, it reveals a different side of Carrie compared to what we’ve heard more recently. The single is an ode to the hard working closet smoker and drinker who despite claiming to avoid bad habits, admits to partaking in a bit of vice every once in a while to take the edge off of a dreary existence.

Co-written by Carrie with Chris Destefano and Hillary Lindsey, and produced by Jay Joyce, “Smoke Break” has a resonant chorus bolstered by ample servings of rock guitar that will invariably reverberate with mainstream listeners and have a difficult time being headed off a path to #1. It’s hard to focus on much besides Underwood’s always-superb singing and the message of the song itself, but some inconsistencies in the perspective of the song weaken its prospects of being called not just a big song, but a good one.

The line “It’s hard to be a good mom, and good wife, and a good Christian” doesn’t really sync up with the character portrayed in the song as being a generally good person who just happens to sneak a few puffs between commercials during cartoon time. Taking a smoke or a sip isn’t exactly a prescription for eternal damnation, and what exactly does it have to do with being a good wife or mother? Even God left the 7th day to rest. Repeating “drink” at the end of the first two lines of the chorus instead of resolving the rhyme also seemed a little lazy in the songwriting.

“Smoke Break” is a song many will relate to, but it doesn’t really leave the listener fulfilled in any meaningful capacity besides raising the spirits with an energetic delivery, and a sort of tacit justification for behavior one could question as truly sinful to begin with. It’s also worth broaching the subject if Carrie and Company hope to carry some of the momentum of the marijuana topic with “Smoke Break” as has been done with other songs recently which make no effort out to disambiguate tobacco from pot. It certainly doesn’t feel like a pot anthem, and it would seem pretty out-of-character for Carrie as the All-American girl, but some may decide to interpret the song that way.

It’s also only fair to measure “Smoke Break” within the context of Carrie’s most recent output. The blockbuster Gospel-esque “Something in the Water” played very much to Carrie Underwood’s pristine Christian side. Then the next single “Little Toy Guns” unabashedly faced the social issue of domestic violence and parental fighting. So we can’t be too shocked Carrie revealed something a bit more light, especially for a lead single for an upcoming album, which pretty consistently these days in the mainstream is an album’s #1 bullet and blockbuster, with the rest of the material filing behind it to deliver greater measures of substance.

You can hear a full version of “Smoke Break” HERE.

The single will be available on iTunes soon.