Look, this song is pretty agonizing, and for a number of reasons, including the overly-hyped, Zig Ziglar-style self-aggrandizing machine-gunning of positive affirmations that are only a Stuart Smalley line like, “And dog gonnet, people like me!” shy of making it so over-the-top the song veers towards the objectionable. Then it’s on to the wholly blown-out overproduction with exploding guitar lines and transmogrified vocals. And last but not least, here comes hip hop has-been Ludacris, making the effort all that much more polarizing to people with distinguishing ears, and pushing some of Carrie Underwood’s fence sitters right off into the alligator pit.

But context is everything here, and it’s critically-important we regard what the end game with this song is. The impetus for Carrie Underwood’s “The Champion” is to be a TV theme song for the Super Bowl on NBC. Carrie Underwood already sings the Sunday Night Football theme for the network. They’re also saying “The Champion” will be used for the Olympics in South Korea. So you know, for what it’s supposed to be, which is a hype song as highlight reel footage rolls in the background, and burly football dudes come marching out of the locker room tunnel making barbaric yawps as confetti cannons and flamethrowers go off behind them, “The Champion” serves its purpose.

I also get that as a Super Bowl theme song, you want to appeal to the widest-possible audience, and bringing in someone from the other side of the cultural divide like Ludacris helps to do that, especially in this era where opportunistic think piece writers from Slate and Daily Kos have fingers hovering over their keyboards just ready to unleash diatribes about the whitening of America whenever possible, like they have in response to Justin Timberlake’s upcoming album, Man of the Woods. It’s smart to try and make a song appeal to everyone if your audience is the Super Bowl since it’s the biggest media event of the entire year. So in that context, I’m not sure “The Champion,” or the Ludacris collaboration specifically is worthy of drawing too much concern over. Let’s not be predictable country music cro-magnons here and understand the world doesn’t just revolve around the country genre. 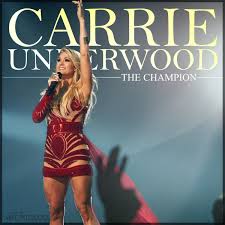 However, if you release this song to country radio and make it the first salvo from an impending new Carrie Underwood record, then the context all of a sudden changes completely, regardless of the original application. And so does the overall assessment of “The Champion.” Now Carrie Underwood becomes the latest country star to become a vehicle for importing rap into the country genre. No, Carrie Underwood herself is not a country rapper, but some of the annunciations in “The Champions” are more indicative of hip-hop than they are of Carrie’s natural Oklahoma farm girl accent. And what might be the most blaring issue with the song—TV theme or otherwise—is that Carrie Underwood’s vocal signal is so heavily processed and resides too long in such a blisteringly-high register, it takes an otherwise iconic singing tone and turns it into darn near a serration tool to the sensitive inner ear. Why does anybody feel like Carrie Underwood’s natural tone needs to be toyed with?

I get it. We’ve run the Queen version of this song into the ground for the last 40 years. And what’s wrong with getting the adrenaline pumping a little bit? “The Champion” is a good workout song, or as something to get the ham and eggers through the morning commute. And what’s wrong with stoking a little competitive and inspirational juice in people? This song is certainly more empowering than most of what you hear on the radio today.

But I don’t know folks. As was expressed recently, we need Carrie Underwood in country right now, but not necessarily this version, singing this song, with Ludacris of all people. When he starts spelling out “Champion” using each letter to spout off some corresponding affirmation, it sends the eyes rolling, and not just because it’s pretty damn predictable and a little cheesy. “Champion” is a longish, three-syllable word, and we just don’t want to hear that many speaking lines from Ludacris. He’s better as a bit actor if he has to be present at all.

If “The Champion” stays relegated to the sports television world, I see no harm, and no foul. Hell the song might even become a little bit iconic in the coming years since certain songs tend to blend with the emotions of the sports realm, and grow a life of their own. It’s not like “The Champion” doesn’t raise the pulse, and it will probably resonate with a lot of people. And it’s not even that country and hip-hop can’t hypothetically mix if it’s done right, though that’s not what’s evidenced here.

But you populate “The Champion” on country radio, and all of a sudden Carrie Underwood is not part of the solution, however slim those prospects were to begin with. She’s now part of the problem, helping to usher in the mono-genre, just like Jason Aldean did when he paired with Ludacris on the remix of mainstream country’s first country rap incursion, “Dirt Road Anthem” back in 2011. And the success of that song gave direct rise to Bro-Country. Yes, “The Champion” has more of a message, but the delivery is quite circumspect.

So have fun with “The Champion” all you want, NBC. I wouldn’t even be opposed to it being released on pop radio, because it’s a pop song. But as soon as Ludacris books his room at the MGM Grand in Las Vegas for April’s ACM Awards to perform this with Carrie, you’re going to have the folks who are willing to give Underwood a pass, or even some who see her as a guilty pleasure, crying foul.