Song Review – Cole Swindell’s “You Should Be Here” 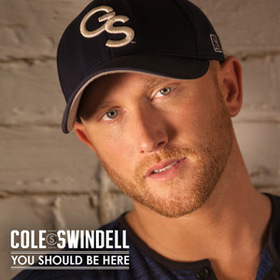 As we transition into 2016, you can anticipate the masters of Bro-Country filing into line to prove they have gravitas in the face of dwindling support for their party hardy dreck falling so quickly out of favor from the sheer frequency such narrow themes have cast over the last couple of years. Prove you can be an artist of substance, or you may not be long for this world post-Chris Stapleton’s CMA wins.

As scary of a proposition as this must be for Florida Georgia Line, so much so that Tyler Hubbard is out there sporting a man bun and the duo is trying to make an emotional ballad out of the vacuous single “Confession,” think about if you’re Cole Swindell, whose dwelled solely in the wake of artists like Florida Georgia Line and Luke Bryan for his entire career. Even Chase Rice is out there saying his early music lacked substance, and to expect something deeper from him henceforth.

But old habits die hard, and it’s easier to do a U-turn in a battleship than to retool Music Row’s songwriting consortium on the fly. So even though we might see the rhetoric heat up about how the music being churned out of the Bro factory is fortified with extra substance these days, it’s best to take a “believe it when we see it” attitude.

Take this new single from Cole Swindell just released called “You Should Be Here.” Don’t get me wrong, it is an improvement from previous output, but when you reach the bottom there’s only one direction to go. Not to belittle the loss Cole Swindell has experienced in his life, but it’s something we all deal with. That’s one of the reasons it makes such compelling subject matter in songs, and “You Should Be Here” strives to stir that sense of bereavement we’re all unfortunately acquainted with.

What issues arrive have to do with everything else in the song. Bro country artists just can’t get away from references to ice cold beer, broing down with the bros, and other crutch phrases and lyrical tropes that take what could be a pretty decent song, and give the listener the sense that the whole emotional aspect is simply pandering of a different style, rendering any impact as fairly shallow and short lived.

Again, I don’t question any specific loss Cole Swindell has suffered, or his co-writer Ashley Gorley who apparently came up with the “You Should Be Here” title and concept. It’s good that at least an effort is being expended to find something better to talk about in songs for Cole Swindell than hooking up. But when it’s peppered with references to smartphone pictures and cracking cold ones, it just feels plastic. These days even Cheerios commercials are trying to get you to cry. And they may even succeed, but they’re still just Cheerios commercials.

“You Should Have Been Here” starts with a strong concept, and that’s the only reason the song rises to become at least somewhat redeemable. But it could have been so much better if Cole Swindell had completely left the Bro era behind and let the song write itself instead of trying to spice it up with buzzwords and cultural reference points from fear of spooking mainstream listeners away by getting too sappy. Show some boldness.