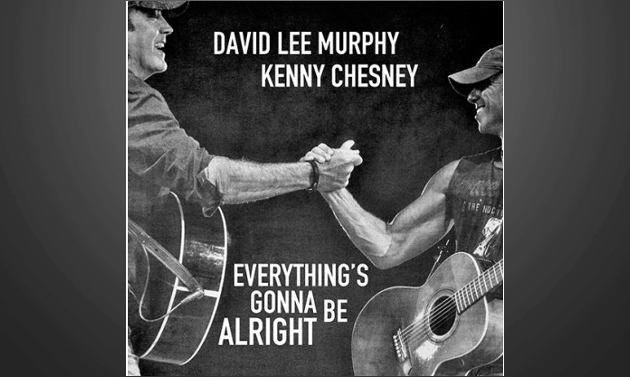 David Lee Murphy had his only #1 hit way back in 1995 with “Dust on the Bottle.” Now Kenny Chesney has knocked the dust off of David Lee Murphy in a very weird collaboration called “Everything’s Gonna Be Alright” that is inexplicably on its way to becoming a bona fide modern country hit. Normally we may be compelled to stand up and cheer when an older country artist whose been previously put out to pasture gets a second chance at life. But when it comes to “Everything’s Gonna Be Alright,” the career of David Lee Murphy might have been better left to fond memory.

It literally takes the conscious country music consumer one second or less to bail on this song. As soon as you hear the unmistakable tone of an electronic drum beat, you’re out. But unlike even many of the super hits from today’s “country” stars, the electronic drums don’t get drown out by the end of the first stanza for pounding stadium drums, they keep droning on throughout the entire damn song with not even a semblance of effort at texturing, completely ruining any other redeeming elements in the song, if in fact there were any.

But there really aren’t. “Everything’s Gonna Be Alright” is just heavily-processed vocals in your standard cookie-cutter white boy reggae Kenny Chesney toes in the sand eternal sunshine ditty. Aside from the production, I’m not sure if the song is “bad” necessarily, it’s just a pretty meaningless effort from a very odd pairing. I mean, are we really talking about a collaboration between Kenny Chesney and David Lee Murphy in 2018 breaking into the Top 25 in the charts, with indications it could end up at or near #1?

I don’t know if David Lee Murphy’s career was ever incredibly celebrated by anyone but his dedicated fans. Not to knock the guy necessarily. “Dust on the Bottle” was a fine song, as were a few others from his discography. But after four Top 10 hits in a span of two years in the mid 90’s, David Lee Murphy virtually disappeared, and was dropped from MCA Nashville. Surprisingly though, he emerged with another Top 5 hit nearly 10 years later with 2004’s “Loco.” Now with “Everything’s Gonna Be Alright” snaking its way up the charts, the fairly mild and oft forgotten career of David Lee Murphy that started back in the mullet era and has now made its way to the Sam Hunt-influence Metro Bro craze might eventually land him in an elite class of country music performers that have attained Top 5 hits in three separate decades.

But what’s the value in late career success when you sell out to attain it like David Lee Murphy has done here? You can forgive the lightness in the writing. You can even excuse the cavorting with Kenny Chesney. Hell Kenny is only a few months from turning 50 himself. But that stupid electronic drum beat, which is the only reason anyone is paying attention to this song, is the type of thing David Lee Murphy should be railing against when a local reporter finds him drunk in a Karaoke bar and complaining how Music Row ruined his career.

I mean seriously, what’s the point? Does David Lee Murphy have an ex he needs to pay off? Why not age gracefully, and not alienate your established fans by chasing trends? Now we’ll probably see this thing nominated for Musical Event of the Year from the CMAs and ACMs, prompting Bobby Bones and others to be able to say, “See, country music does care about it’s older artists!”

There is much much worse out there right now for sure. But if this was how David Lee Murphy was going to make his comeback, perhaps he was better remaining out to pasture.