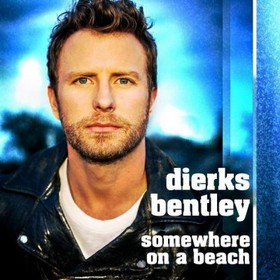 Dierks. My man! Why hast thou forsaken us, and the day after I told a hockey site, “Dierks Bentley is very well-liked inside and outside the mainstream of country” no less. Where’s the non sober version of Jason Isbell when you need someone to proclaim “Dierks is a douchebag!” on social media?

Look folks, everything’s going to be just fine. “Somewhere on a Beach” is as godawful as it sounds on paper, but this is classic bait-and-switch Dierks. This is Dierks trying to be all things to all people. This is “Drunk on a Plane #2.” Dierks has been doing this his entire career, and when his new album comes out, it will still be one of the better ones released in mainstream country all year I bet. But for now, he needs a bullet on the radio so he takes a bitter pill, swallows hard, a puts out a dumbass beach song. Eat your heart out Kenny Chesney.

Not even a mean, echo-filled guitar tone driving “Somewhere on a Beach” could graduate this effort to anywhere near redeemable. It’s just bad. Real bad. It’s so bad, it’s hard to know where to start unraveling the badness, but let’s start by bemoaning this new trend in pop country songs to troll ex-lovers by bragging about how you’ve moved on. Isn’t navigating the madness of human love hard enough without some asshole saying “Nanny nanny boo boo” to you when all you’re trying to do is mend a broken heart? We got this same thing from Luke Bryan’s new ear screw with Karen Fairchild “Home Alone Tonight.” It’s all about going out and having a good time, and then rubbing it in you ex-lover’s face. What the hell is this, freaking high school? Get over yourselves. And all of these songs are centered around people’s stupid-ass phones.

What separates “Somewhere on a Beach” from all of the other Dierks Bentley sellout singles is the emergence of the rounded off vowels and dropped S’s that accompany the effort to instill a song with the metro Ebonic hipness indicative of Sam Hunt, which of course goes part and parcel with the narration of douchebag behavior.

My favorite line of the song is when Dierks states, “She got a body.”

Well I’m so happy Dierks that your new lover has found a mortal coil to possess, lest she be stuck between the spiritual and material world for eternity, resigned to perpetrating unverified natural phenomena in an attempt to get the living to acknowledge her presence like a poltergeist.

“Somewhere on a Beach” is just a big shit sandwich, and all Dierks Bentley apologists are going to have to take a bite. Yeah yeah, wasn’t Up On The Ridge an awesome album, and weren’t a bunch of cuts from Riser inspiring, and isn’t it refreshing to see Dierks can laugh at himself with his Douglas Douglason & Hot Country Knights gimmick. But none of this will make this monstrosity go away.