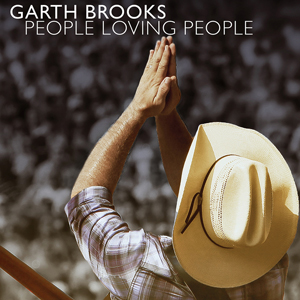 So here it is; Garth’s first single since 2007’s “More Than A Memory.” But more importantly, it is the first real single since he retired in 2001—representing a new album, and a new era for one of the biggest music stars the world has ever seen. And with this new song, the world is who Garth courts as his audience.

Initially Garth’s debut single after retirement was slated to be a song called “Tacoma.” RCA even took out full page ads in country radio trade periodicals and at one point scheduled a release date for the song as July 28th. Then for wherever reason, all of those plans got scrapped in just one example of how Garth’s triumphant return has been beset with stops and starts.

One of the reasons Garth may have decided a switcheroo was in order for his new single is because of the topical nature of the subject matter in “People Loving People.” With the globe, and many communities in the United States in such disarray—with beheadings, sectarian violence, civil war, and civil rights issues dominating headlines—the song is certainly current. And it sees Garth slide into the role many upper-echelon superstars have championed during times of turmoil over the years by attempting to show some leadership from the entertainment world when a leadership vacuum seems to exist from our elected leaders and in the world stage at large.

This isn’t the first time Garth Brooks has tried his hand at settling world tensions with his music. Garth once used his “We Shall Be Free” song in the wake of the Rodney King beating and other world events to upstage the entire Super Bowl. But in releasing “People Loving People,” Garth doesn’t do himself any favors with his many detractors, or the people who were hoping Garth’s return would also herald the return of country music that actually sounded something like country. It is unlikely that “People Loving People” fairly represents what folks can expect from Garth’s new album. If the song “Tacoma” was selected as the first single, as it almost was, it probably would have represented a much more country-sounding offering. But Garth decided piggy backing off of current events, and releasing a song that would have a greater impact on country radio and the world stage at large was a more ambitious and pragmatic move, and he’s probably right.

Garth’s altruistic desires with this song will resonate deeply with some, and come across as dubious to others who will accuse him of opportunistic mawkish grandstanding covered in sappy icing. Here is Garth once again demanding to be the center of attention. But taking a sincere look at the lyrics and message, and without lacing the assessment with any personal slants about Garth’s previous motives, “People Loving People” is not badly written, or wrong in its message or its ambition. This song is inspiring, and says something a lot of people should probably hear. At the same time, as an exercise in intellectualism, it is a little innocent and short-sighted. Of course all people should love each other, but that’s a little hard to hear when someone has just slaughtered your family, or beheaded one of your countrymen. As much as love is inherent in the human design, so is justice.

Beyond weighing this song against much heavier subjects usually not appropriate for the realm of music entertainment, “People Loving People” doesn’t really capture Garth in his ideal element. Nor did “We Shall Be Free.” The key of the song is higher than where Garth’s voice settles into its sweet spot—where he can dip into those low bass notes, and quickly drawl back into the higher register to squeeze the emotion out of a lyric. Think of “The Dance,” or really any of Garth’s bigger hits. The lead guitar answering Garth during the chorus’s “Wow oh oh” portion feels a little dated. Garth is a passionate performer, and though in the mind’s eye you can see him singing the hell out of this song live, that emotion and energy is not really endowed on this recording. Sometimes you can’t even really understand the words, and this is on a song that is built upon them.

Though I don’t question the sincerity of Garth’s approach with this song, many will. But releasing “People Loving People” right now is quite savvy, and with production that leans heavily towards pop rock, it will be a good way for Garth to warm up to the new environment in country radio that is very much focused on the non-country here-and-now.

“People Loving People” will do moderately well on radio, while consumers hungry for new Garth music will make it rocket up Billboard’s Hot Country Songs chart. That is, if it is released digitally. Detractors will seize upon the opportunities the song affords them, while many others across genre lines and international borders will find a message that they are thirsting for. Ultimately, “People Loving People” presents a mixed bag, and leaves the notions of exactly what we might get out of Garth 2.0 fairly ambiguous.

In the end, “People Loving People” is very, very Garth.

1 Gun Up for an ambitious song with a good message.

1 Gun Down for fairly unimaginative and non-country production, a lackluster vocal performance, and potential commercial opportunism off of current events.