Song Review – Hank Williams Jr. “Are You Ready For The Country” 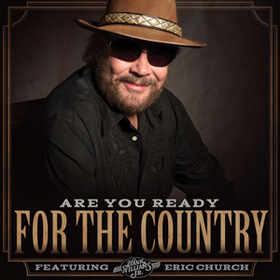 Bocephus is back baby, and be ready for him to take the world by storm through a mess of wild gesticulating hand gestures and name dropping himself in his own songs.

Ahead of a comeback album called It’s About Time scheduled for release on January 15th, 2016 through Scott Borchetta’s NASH Icon label, Hank Williams Jr. has issued a rendition of the oft-covered “Are You Ready For The Country,” originally penned by Neil Young, and covered by Waylon Jennings some years later.

“Are You Ready For The Country” appeared on Neil Young’s blockbuster Harvest album that went on to become the best selling record in 1972. However this particular track was considered an afterthought at best, and a joke song by some. Neil Young bangs on a piano while the Stray Gators sloppily follow along, and the warmup banter is left dangling on the front of the master. It was recorded in Neil Young’s barn, but in 1972, especially with David Crosby and Graham Nash singing backup, Young could have shit on a shingle and people would have loved it.

Same could be said for Waylon Jennings circa 1976 when he took the song and made it the title track of an album by molding the melody into a punching, driving back beat, while changing up some of the lyrics to take it from an ambiguous, possibility veiled political song into a ballad of self-affirmation—perfect for the sensibilities of Bocephus.

Joining Jr. on the track is Eric Church, who also joined Jr. on the stage during the 2015 CMA Awards for the track’s world debut. Also on the stage that night was Jaren Johnston of The Cadillac Three, and apparently The Church Sisters who recently signed a development deal with Big Machine. The performance was a Big Machine stage party apparently, though The Church Sisters were much overshadowed by the troika of boisterous Gospel singers—the texture that links the Bocephus version of this song to Waylon’s.

“Are You Ready For The Country” version 3.0 is fine I guess. It’s fair to question whether there was any tread left on the song’s tires to begin with, and they may have started as budget 2-plys out of the showroom. The groove that Waylon found seems to elude Hank Jr. in lieu of a more boisterous and punchy production, and the rustic nature of Neil’s original is completely left behind. It’s fetching to hear fiddle to start off the song, but almost immediately you have Zildjian overhead ringing in your ears assuring you this listening experience will be just as much rock as country, and there will be more shouting than singing. “Understated” and “subtle” are things Hank Jr. has never had much time for.

While listening, you all of a sudden realize that the point of Hank Jr. covering this song is to extend a theme begun earlier in his career. First you had “All My Rowdy Friends Have Settled Down,” which evolved into “All My Rowdy Friends Are Coming Over Tonight,” and then morphed into the “Are You Ready For Some Football?” Monday Night Football theme, to now Bocephus shouting “Are You Ready For The Country?” after being shit canned from the TV gig (or quitting, depending on who you believe). I half expected Al Michaels to take it away at the end. “All My Rowdy Friends Have Settled Down” really hit on something. Now all that’s left is bluster.

No major complaints here though. It’s harmless. Hank Jr. does put a lot of heart into his songs and performances, even if it sometimes feels a little artificial. It’s not something that will get you too excited for what he has in store for the new record, but not something that makes you lose faith either.