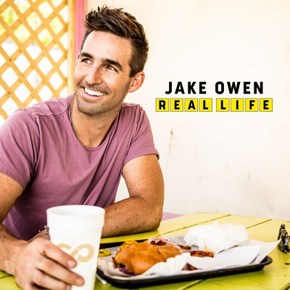 Upon first listen, this new Jake Owen single is a superior candidate for an unabashedly scathing review. What, is he trying to rap again for goodness sakes? And though there may be a message, there’s really no story. At it’s heart, “Real Life” is yet another example of replacing rhythm for melody, and lists for story. So much for all of Jake Owen’s rhetoric about bringing more substance to country music.

And don’t get me wrong, this song is pretty terrible, not particularly country, and plenty full of reasons to label it as paltry. But there’s a little something going on here that makes it slightly more redeemable than your average mainstream single vying for shallow summer listening. Maybe this is more of a commentary on just how far country music has slid as opposed to any true amendable properties included in this tune. But when I hear it, the blood pressure doesn’t go up terribly.

Jake Owen sits in this precarious position as a second tier mainstream country music star in an industry where there’s never been more discrepancy between the have’s and the have not’s. If you’re not a perennial for the CMA and ACM’s Male or Female Vocalist of the Year, then you’re barely receiving any attention these days. Country music has never been so top heavy, and so susceptible to tipping over and crashing down because of it.

Meanwhile here is Jake Owen who’s just able to tip the scales enough to justify playing amphitheaters and even some small arenas, yet his singles always seem to perform slightly under expectation. “Days of Gold” a couple of summers ago sounded like a blockbuster, but it couldn’t crack the Top 10. Only when Owen completely sold out with “Beachin'” did he make it to #1.

But the size of Jake Owen’s reach has also been an asset for him. Known to treat his fans better than most anyone you might hear on the radio, he’ll show up out in the parking lot before shows and party with tailgaters, set up spontaneous rendezvous through social network and have soirees on river banks or at Waffles Houses (like he did to promote this single), personalizing the experience. He recently took traditionalist Tony Martinez out on tour with him on a whim, and even though he sometimes contradicts himself with his music, Owen has been known to speak out. Regardless of what you think about his music or the current length of his hairstyle, Jake Owen at least puts out the effort to keep it real.

And that’s what makes “Real Life” an acceptable offering from Owen, even if it isn’t particularly good. I see him trying to catch a similar vibe to what Kenny Chesney was attempting to go for with his latest album The Big Revival, but failed. “Real Life” seeks out a separate audience from the jar-headed beer and tailgate crowd, without being so heady or preachy the point is lost on the audience. There’s nothing real about the depictions you either hear or see in the vast majority of country music’s blockbuster singles, regardless of what Dallas Davidson and others want to tell you. The women aren’t always super hot, and the trucks aren’t always shiny brand new. People have to work jobs, and have friends who may be dumpy, but are much more cool to hang out with than the waxed chest and bikini-clad crowd.

The most polarizing thing about “Real Life” is the topic of whether Jake Owen is singing or rapping the verses. Either way, the lack of melody is disturbing, but where on “Beachin'” I ruled on the rapping side because of the Ebonic inflections and pentameter of Owen’s words, “Real Life” feels much more laid back; much more natural. The difference between talking in songs (like in Charlie Daniel’s “Devil Went Down to Georgia”) and rapping in songs (like “Dirt Road Anthem”) is one of those “you know it when you hear it” type of judgement calls. And when it comes to “Real Life,” I’ll rule it a talky.

Also where “Beachin'” was unabashedly reliant on electronic sounds (not to keep comparing the two), “Real Life” is mostly (if not all) organic, though admittedly too rhythmic in nature. The megaphone filter on the vocals also adds a little bit of welcomed grit. I wouldn’t have a problem with this song on a pop station, even though it feels a little like 90’s fare. And it’s still most certainly a faux pas to call it country. But we have much bigger problems than Jake Owen releasing some silly, lighthearted summer single where he talks instead of sings about real people.