Song Review- Jana Kramer’s “I Got The Boy” 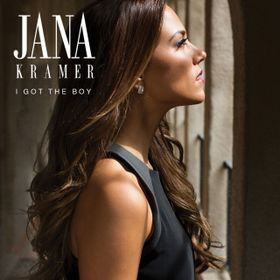 If there’s any silver lining to the dark, ominous clouds hanging like a low ceiling over country music’s female population, it’s that faced with the reality of their songs systematically failing at radio, they’re inadvertently bestowed the freedom to do whatever the hell they want without having to worry about the radio ramifications. That’s one of the reasons females are leading the pack in country creatively, while their male counterparts are forced to perpetually chase the next #1 to stay relevant.

Either you can dock Jana Kramer street cred for once dating Brantley Gilbert, or you can dole her extra credit for dumping him. Normally the love life of a performer would be nobody’s business but their own, but it seems especially relevant when broaching the subject of Jana’s latest single, “I Got The Boy.” Thrice divorced, with some other engagements mixed in there, including one to a certain singer who is so insecure in his manhood he must have a set of brass knuckles welded on his microphone handle, Kramer has intimately seen the in’s and out’s of the various gestation periods of the modern American male, and can sing about them with authority.

Kramer’s upcoming album is called Thirty One, boldly displaying her born on date during a moment when many women get demure about their age. But Kramer isn’t dwelling on emerging wrinkles, she’s calling upon the wisdom of age in “I Got The Boy,” which was released way back in the spring, but has been etching a slow build over these many months and is just now breaking into the Top 25.

Written by the somewhat strange troika of Tim Nichols, Connie Harrington, and Britney’s sister Jamie Lynn Spears (perhaps for her EP, but it didn’t make the cut?), “I Got The Boy” isn’t the victorious proclamation of Kramer’s conquests in the often banal trenches of the dating ritual, it is a reflective tune that makes use to the timeless country songwriting tool of turning an idea back on itself to reveal the truth of things. Exquisitely-written, “I Got The Boy” also checks itself before waxing with jealously even though that window is left wide open in the narrative, showing the wisdom of the perspective and approach.

Jana Kramer’s voice is perhaps where the composition struggles a bit. She takes a more forceful, bold approach, where maybe more hushed and intimate tones would have better fit the mood. But the smoky nature of her tone at the start of each voice helps texture the delivery, despite feeling very much referred by the straightforward styles of the mainstream.

The music of “I Got The Boy” is tasteful, and respecting of country music modes without particularly pandering to them, but most importantly the production gets out of the way of what is best about this track: the writing. A song like this would regularly not get cut by a major label artist, and certainly wouldn’t have a shot at country radio. But perhaps it’s a new day. The blow back from Salad Gate has country radio programmers on the hot seat, and all of a sudden listeners are discovering there’s more to music than sexed up tailgate songs.

“I Got The Boy” is no world beater, but it certainly is a welcomed surprise in an otherwise bereft and hopeless climate for country music women on radio.