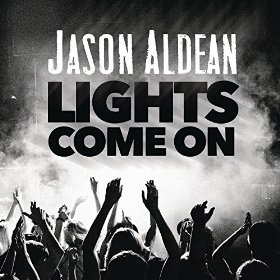 “Lights Come On” begins by describing various types of hard working people to establish the baseline for listeners that this is music that should appeal to them.

You’re a crack-of-dawn, Monday-morning, coffee strong
Poured everything you got into a paycheck Friday night
You’re a Powerstroke diesel, backhoe-riding king of beers, 18-wheeler
Driving, living life in between the lines
Of clocking in and quitting time

Since most everyone has a job, it sounds like Jason Aldean is speaking right to them. It’s like when a gypsy stares into a crystal ball and tells you that you’re in love with someone. Though it sounds like the message is catered specifically for you, it’s actually built from generalities hitting on the most obvious archetypes. This technique is not unique to “Lights Come On” specifically—this sort of lyrical laundry list affirmation and demographic pandering has been one of the most oft-used tropes in mainstream country for the last 10 years.

Where “Lights Come On” veers into unprecedented territory is when it takes messages that are usually implied instead of spoken, or subliminal instead of overtly stated, and just throws them right out there for everyone to contemplate. Corporate consumers sup at the trough of mainstream country because they want to feel normal and accepted, and part of something bigger than themselves where everyone they know is the same as they are, down to the songs they enjoy, the concerts they attend, and even the beer they drink, and the way they think.

The song even includes instructions of what you’re supposed to do as a mainstream country consumer attending a concert. Go to a concert for Jason Aldean, Luke Bryan, or some other major mainstream country star, and the first thing that will strike you is how the audience loves to be told exactly what to do, and obeys obsequiously.

Notice how affirming the lyrics are, how “everybody’s” screaming, “everybody’s” singing, “everybody’s” feeling, and “every word to every song” is being sung by the crowd. And yes girls, you’re getting taken home. So you better join in. Aldean even affirms himself by saying in third person. “Aldean and the boys about to blow it up.” As people sing along to “Lights Come On” in their car, or at home, or in their office, they visualize themselves in the crowd of a massive concert, singing every word on command, putting their hands in the air like they just don’t care, and doing whatever else is demanded of them by the superstar barking at them on stage. Next thing they know they’re on StubHub spending $275.00 for Jason Aldean concert tickets.

“Lights Come On” is not a “song.” It’s an infomercial for corporate country concerts. Balance that between the legendary road and concert songs of yore, like Bob Seger’s “Turn The Page,” or Jackson Browne’s “The Load Out” for example. These songs were very much musicians talking shop, but in a way everyday listeners could still identify with because of the emotion and story involved.

Much of mainstream country music today—and there’s no better example than “Lights Come On”—is simply a tool to keep the consumer-driven society churning out positive results through re-affirming the life patterns of “work hard, spend hard” people who lead lives that are highly productive for the economy, yet also pour most of their proceeds back into the economy, keeping the whole system flush. The reason corporate country reaches so many people is because it offers such an easy solution to identify yourself as a person through this all-encompassing, all-inclusive corporate cultural package that controls what you think and how you spend your money and time from cradle to grave. That is why corporate sponsorship is such a part of today’s country music. Listen to the radio and it’s hard to tell when the music ends and the commercials begin. “Lights Come On” perfectly illustrates this.

Trying to block out all of the obvious concerns with “Lights Come On,” how is it as a song? It’s probably not as bold as Aldean’s previous lead single, “Burnin’ It Down,” and will probably be generally better received, but it’s a hard rocking arena rock anthem with no real story, no substance, and no value beyond helping to perpetuate the ultra-consumerist society that country music has become a soundtrack for.