All across the fruited plain of America and beyond there are thousands and thousands of people that when they hear a modern country song, they shudder and wonder just what the hell has happened to the music they once loved; the music their parents and grandparents listened to. You know, REAL country music . . . like Justin Moore . . . they tell themselves.

When it comes to mainstream fans, Music Row has perfected how to get them coming and going. For every Sam Hunt, there’s a performer like Justin with his 100,000-watt accent and massive Stetson perched atop his tiny head to assure you this is REAL country baby. Justin Moore tells his crowds every night that he’s too country for Nashville and he’s alienated and ostracized due to his twang, while the label that signs his checks is the same as Florida Georgia Line’s and Taylor Swift’s. 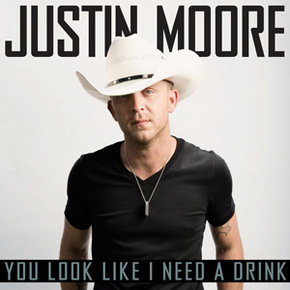 The worst part about Justin’s new single “You Look Like I Need A Drink” is Justin Moore. But if you put aside all biases and butthurt feelings about the time Justin tried to convince everyone he was an Outlaw and just be honest about it, this new single is not horrible.

“You Look Like I Need A Drink” is mostly built upon a dumb dad joke done by switching words around, but so are a lot of old country songs that would be counted as standards today. A war of attrition has led us to the point where if a song is actually tracked in a studio by human beings playing instruments that we take it as a victory, and twangy electric guitars feel like the nostalgic sound of yesteryear, similar to how the steel guitar once did.

“You Look Like I Need A Drink” even a has an inkling of a “story” I dare say if you listen closely. It’s about a girl coming over to tell a guy something she doesn’t want to say, and he doesn’t want to hear, instead of a quip some guy says in a bar when a hot babe walks through the door. Despite the upbeat tone of the music, it’s a song about heartbreak. If nothing else, “You Look Like I Need A Drink” passes the “I wouldn’t change the channel if it came on” test.

Still most of what we’re doing here is selling Budweiser, and much of the wit of “You Look Like I Need A Drink” can be garnered by simply reading the title. Written by Rodney Clawson, Matt Dragstrem, and Natalie Hemby, you can tell a committee came up with this. Perhaps we’ve finally purged the tailgate references from mainstream country, but building songs around beer references is going to be a much bigger uphill battle.

Left and right it appears Nashville’s major labels are retooling with traditional country (or traditional sounding) artists for this post-Stapleton country music reality that may be about to hit them in the face, but Big Machine thinks they’ve already got one in Justin. And let’s not downplay that officially this is a lead single from Justin’s yet-to-be-named new album, and compared to what lead singles usually sound like these days, you can’t be too judgmental on what Justin is offering up here.

Oh the poor bastards who live in a country music world where this is the best they’re ever offered. But even to the true country perspective, it’s tough to call this terrible.