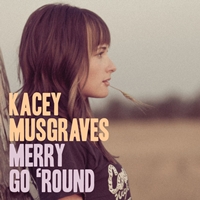 Well now. It looks like we have a little girl from Texas looking to shake up country radio with her slanted views. Let’s say we pop the hood and see what all the fuss is about.

Kacey Musgraves officially comes to us from the reality show world, which may file her under “Flat Chest” in Eric Church’s little black book. But screw him, we’ll judge the music on its own merit. And besides, if Kacey came into country from reality TV land, it was through the back door, placing 7th on the show Nashville Star buried on the USA Network. It wasn’t her success that shoved her into the spotlight, it was her failure that forced a re-evaluation of her music identity and purpose, and resulted in this dower and droll look into the American dream.

Possibly the most remarkable thing about this song is where it’s coming from. In the independent/Americana world, “Merry Go Round” would still be good, but its content and approach would be nothing out of the ordinary. But this song isn’t being spun on NPR, it’s being released directly to country radio by Kacey’s major label Mercury Records, who singed her just this year. At this point “Merry Go Round” doesn’t even have an album to call home, but it’s been sitting in the low 30’s on the country charts, threatening to take its subversive message mainstream.

As progressive as the song’s approach seems both lyrically and sonically, the theme of “Merry Go Round” is nothing new. Navigate to YouTube and punch up The Monkees “Pleasant Valley Sunday” for example. Were so used to unimaginative drivel oozing out from Music Row’s orifices that “Merry Go Round” feels like it comes from a very deep, poetic, and original place. And to the modern, mainstream perspective that Kacey is both a product of and a character in, it is.

It’s endearing how some of the lyrics don’t rhyme, and how the ending lyric takes a song that is seething with quiet anger and innuendo, and then unleashes that anger with little governor. Kacey’s vocal cadence evokes memories of Miranda Lambert, another Texas product with sweet lace for tone that contrasts with biting language and themes to enhancing the listening experience. Kacey’s voice is what gives this song mainstream accessibility. The music works just about perfect to create the sedated feel of complacency gripping America’s homogenous corporate culture.

The most powerful gift of music might not be its ability to console you in pain, but to pierce your reality bubble and let the wisdom of enhanced perspective guide you to your true self. As immature and judgmental as “Merry Go Round” might seem in places, this altruistic aim is its objective, and its outcome. Even the debate this song can fuel about the beauty of simplicity vs. the importance of self discovery and the broadening of perspective is a healthy result.

“Nothing suffocates you more than the passing of everyday human events.” – Marilyn Manson