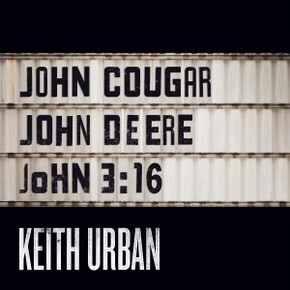 Well that’s it folks. If we weren’t starring at the moment when any and all vestiges of the roots of country music had been completely eradicated from the mainstream before, then we are certainly doing so right now. It’s no longer a narrative about trying to hold onto the last little pieces of what made country music different from other genres. That ship has sailed. “Country” has now been completely expelled from the country music genre. It’s now a question of how do we rally whatever support is left to storm the castle and take it back, or at least earn enough respect to have an audience in the king’s court or win a wing in mainstream country for actual country music?

Keith Urban’s “John Cougar, John Deere, John 3:16” is nothing exceptionally bad compared what we’ve been seeing from male country artists and this current Metro-Politan trend. This is more an illustration of the permeation and dominance of the trend now that Keith Urban has become the latest to fall under its sway. You didn’t see Keith Urban chasing Bro-Country a couple of years ago, did you? This is a guy who was the CMA Entertainer of the Year a decade ago. Keith Urban is now 47-years-old if you can believe that, and like so many others, there wasn’t the strength or will of the fight to resist where Sam Hunt has taken the genre.

Making this affair even more sad is “John Cougar, John Deere, John 3:16” really includes the worst of both Bro-Country, and this new Metro-Bro business. It’s a laundry list song of the highest order, and a drum machine-driven, R&B bass-line dance song.

But I almost don’t want to hate on this song as much as I should. Like a lot of these Metro-Bro offerings, it’s not as immediately offensive as a lot of what crowned the Bro-Country era, or even the early EDM-inspired country songs from Jerrod Niemann and others. Like other recent Keith Urban singles such as “Somewhere In My Car” and “We Were Us,” there’s a drive and vitality to the song, and a pace to the pentameter of the lyrics that is appealing without compromising melody. Also making “John Cougar, John Deere, John 3:16” a little more interesting to the ear is the way it modulates chords at the end. It’s no “These Eyes” by The Guess Who, but it is an interesting wrinkle that shows a little more effort than just throwing more rhythmic layering on top of a drum machine beat.

If I heard this come on a pop station, I probably wouldn’t take huge exception with it. The issue is that it’s being called a country song, and being released to country radio. Forget there’s nothing country about it, “John Cougar, John Deere, John 3:16” aggressively pursues the erosion of many country music prerequisites and values. By speeding up the electronic drum beat coming out of the bridge, it leaves no doubt in the minds of listeners that human hands weren’t involved in many of the sounds emanating from this song.

And why are we praising John Cougar in this song as opposed to a country artist? Why not John Cash or John Conlee? If Keith Urban and other country stars want to kneel at the altar of Mellencamp, that’s one thing. Much of mainstream country has been reconstituted nostalgia from “Little Pink Houses” and Bob Seger for years already. But as sad as it was to see country music aping classic rock instead of forging its own legacy, at least it was indicative of the heartland more than just the shallow references to Pepsi-Cola and Wheel of Fortune that  “John Cougar, John Deere, John 3:16” leans on.

Mellencamp sang about how “the simple man pays the bills that kill,” and how “life goes on after the thrill of living is gone.” But what is Keith Urban singing about? “I’m a teenager,” he chimes, “Never grow up, never grow old!” This endless summer and endless youth sentiment is the exact opposite of what Mellencamp sang about.

“John Cougar, John Deere, John 3:16” talks about Kris Kristofferson’s “Sunday Morning Coming Down” and Don McLean, but instead of being baptized by the sounds of country music, the protagonist prefers his baptismal be through rock and roll. And of course it doesn’t help that nothing else about the song is indicative of country. Even the sentimental and reserved bridge is simply pandering to mainstream country’s religious base.

This song was written by Shane McAnally, Ross Copperman and Josh Osborne, which if you’re looking for the songwriting triumvirate behind this “new sound,” they might be it. Shane McAnally—for all his great Kacey Musgraves work—is the puppetmaster behind Sam Hunt. And Ross Cooperman was the guy that worked on Brett Eldredge’s “Lose My Mind” and others.

I don’t care how catchy it is, “John Cougar, John Deere, John 3:16” is not even close to country, and for that, it deserves total disqualification.