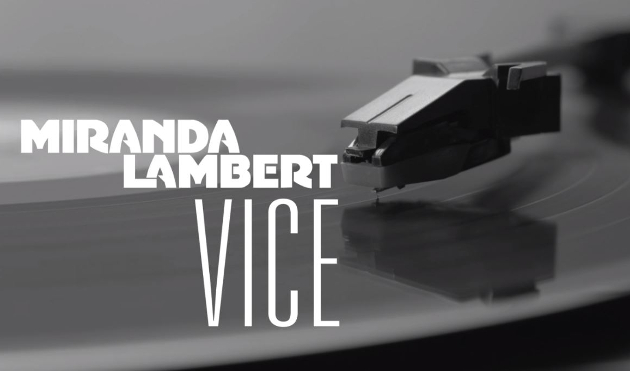 Flying low over the country music masses to survey the landscape, it’s patently clear that in the 48-hour aftermath of Miranda Lambert releasing her first single in over a year, how you feel about it has a lot to do with how you feel about Miranda Lambert, or Blake Shelton. Saving Country Music headquarters has received numerous missives demanding that “Vice” be either unmercifully admonished like only Saving Country Music can do, or praised as an immediate Song of the Year candidate for its obvious brilliance, or said authors of said communiques promise to never frequent this website again, chased with a pointed slur about what a piece of excrement Blake, or Miranda, is.

That sure is a lot of pressure, especially when I’m not 100% sure how I feel about “Vice” just yet. Though some initial thoughts and observations have externalized themselves for sure, this is a song that feels like it needs a little bit of context within a greater album before we can come to any solid conclusions—usually not ideal conditions for a lead single. But Blake Shelton sure played up the dynamic of his ex love affair with Miranda for the first songs emanating from his latest record, and it worked out pretty well for him. So Miranda chose to do the same.

The fact that “Vice” has become such a polarizing topic among the country music population proves that music is no longer about music, but personality. Many mainstream fans have their favorite artist or artists, and they adhere to a strict regimen of only ingesting news and information from said artist, following their every move, changing their social network avatars exclusively to an image of said star, and then emailing poor bloggers about how they better acquiesce to their slanted opinions or else. Yeah, that’s not creepy at all. Much of mainstream music is just a vehicle for celebrity worship these days. It’s all part of the expanding “Stan” culture fueled by the immersion of social network into our lives.

But Blake Shelton, and now Miranda Lambert, have brought the polarization and acrimony on themselves. Some may even surmise it was all planned to boost sales and interest. If Blake Shelton was dropping hard hints that “She’s Got A Way With Words” was about Miranda, then “Vice” is Miranda just coming out and saying it without pretense. She’s already iterated that “Vice” isn’t bred from vicarious characterization of someone else’s experiences, but ripped straight from her personal narrative. And so when lyrics such as, “another bed I shouldn’t have crawled out of” come out of the speakers, it seems she’s all but fessing up to the rumors that it was her infidelity that ended the Lambert/Shelton dynasty.

Oh, but we shouldn’t be talking about any of this, huh? It’s all veering too close to TMZ for you? Well take it up with Miranda, and Blake. They want their dirty laundry to be the attention driver for their new music, so screw me for remarking on the big 2-ton elephant in the room that the bullet points preceding “Vice” direct your attention to. I don’t care who Miranda or Blake are banging; it’s supposed to be their business. But despite all the calls for privacy from the doomed couple amidst divorce proceedings, they sure didn’t mind their own requests in their music.

Yet should we criticize Miranda for exploiting the rumors of her cavorting to draw attention to her country music career, or should we commend her for the honesty illustrated in her lyricism? The answer is probably both. Co-written with Shane McAnally and Josh Osborne, instead of using her debut single to throw a counter punch at Blake Shelton or as a vessel for self-righteous balladry, Miranda Lambert does something completely foreign to the modern-day psyche—she actually admits to her mistakes, while delving into their root causes. Sure, Shelton fans might be fuming with rage that she broke poor Blake’s heart, but that ship has sailed. The songwriting and honesty of “Vice” is hard not to be impressed with.

It’s the production and instrumentation that’s a little all over the place. It’s cool that the song starts off with spoken word, and the immediately familiar and warm sound of a needle searching for the groove of a song on vinyl. But let’s not overplay the value of this window dressing too much. It is very, very popular right now to talk about vinyl records in your pop country songs as the LP resurgence has apparently reached even into the backwards baseball cap and Budweiser demo of country. “Vice” isn’t the first to try and instill a little analog authenticity into a track through use or mention of vinyl records, it’s the 3rd or 4th currently at radio. The Beastie Boys were pulling this trick 25 years ago, so let’s not get too ahead of ourselves, and who knows how much of the intro of “Vice” will make it onto the radio edit.

Overall the approach to “Vice” is this distressed sound inspired by east Nashville that is starting to become really hip. It’s the Jack White influence, and the way some are reacting to the popularity of Chris Stapleton and Sturgill Simpson, aka the “Dave Cobb Effect.” But you can’t help but point to the futurama, synthetic synthesizer pulses as the most significant landmark for the track, and being decidedly un-country, they are probably just as polarizing as the song’s subject matter. Tuning down the frequency on the feature helps it embed in the track to where it’s more texture than say Rush’s use of the same element in “Tom Sawyer,” or Taylor Swift’s in “Starlight,” but it still is not what many country listeners expect to hear from a country song. It’s no different than Sam Hunt talk rapping.

Again, I want to hear more of this record before I’m locked into any opinions about “Vice,” especially since her new album could take a decidedly east Nashville turn on us. In other words, more Anderson East than Blake Shelton. Lambert producer Frank Liddell has been spotted east of I-24 quite a bit lately.

You may think Miranda is a horrible person, but music is not a personality contest. She did what all great artists do, which is channel her weaknesses into art. The music could have used a bit more direction, and much more country influence. But overall this is not entirely terrible.