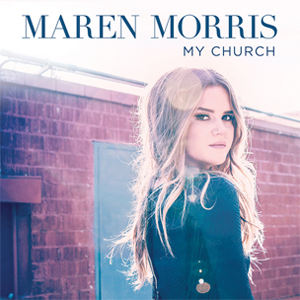 Get ready, because we’re about to have another starlet and her breakout single gerrymandered to the top of the charts via unilateral action by iHeartMedia. At least this time it’s a much better selection than Kelsea Ballerini.

Maren Morris is a 25-year-old singer for Columbia Records Nashville who released her debut EP back in November of 2015. She’s also scheduled to be the latest benefactor of iHeartMedia’s “On The Verge” program, which takes a song and guarantees it spins across the country music network of America’s largest radio station owner. Her debut single “My Church” will soon be heading north on the charts, and like numerous “On The Verge” artists before her, it could spell the launching of a serious country music career.

If you’re wondering what the Dave Cobb-influenced mainstream country world might sound like after the success of Chris Stapleton, take a good sniff at “My Church.” The arrangement and grainy production quality could very well be that of Lindi Ortega or Nikki Lane, but this is a major label artist looking to gain the attention of the fickle mainstream country music fan who traditionally discounts the female performer right off the bat, and scoffs at anything that falls sort of slick production standards.

“My Church,” similarly to Charles Kelley’s recently “critically-acclaimed” single “The Driver,” somewhat fools the listener into thinking they’re taking in something really “deep” and fresh simply because the production sounds that way. When broken down a bit more though, a less than perfect effort is revealed, even if it’s above average for its peer group.

Certainly one of the most talked-about elements to this song will be that Maren evokes the sainted names of Hank Williams and Johnny Cash in “My Church,” and even goes on to mention the songs “Cold, Cold Heart” and “Ring of Fire.” Though some will accuse Maren of tokenism or trite name-dropping, the references do feel organic to the idea behind “My Church,” which is that Maren finds her religious moments behind the wheel, listening to classic country on the radio. And who among us can’t identify with that?

Even if you want to hate “My Church,” it’s hard not to cheer some of its merits. And as silly or sad as it may seem, yes, it does make a difference that this is a song from a mainstream artist. From most Americana performers, “My Church” would be album filler. But from a cute young major label starlet, we’ll take it. It doesn’t make up for the fact that like so many mainstream songs, it replaces a resolving third verse for another pass at the chorus, or that it’s the equivalent of country radio catnip since it references radio specifically—something the good ‘ol boy radio programmers love because it affirms their radio format is still relevant, even if it isn’t.

Not a world beater, but not bad, at least “My Church” gets the texturing and vibe right. It is a step in the right direction. But let’s tap the breaks a bit on proclaiming Maren Morris the second coming of Kacey Musgraves, which even then might still be a polarizing concept in the mind of some listeners. I would pin Morris more as the next Mickey Guyton or Jamie Lin Spears, who both released very promising debut singles, only to follow it up with EP’s full of flat pop music resulting in a deflated career.

Taking a gander at the Maren Morris EP, it quickly reveals that “My Church” is the exception, not the rule. There’s a song called “80’s Mercedes” that is a total foray into the pop world with only a conciliatory spritz of steel guitar essence waffing in the far background. “Drunk Girls Don’t Cry” starts with a Calypso-style feel before giving way to pseudo suburban white girl rapping. I’ve been saying for years that if Taylor Swift showed up on Music Row right now, they’d make her release an EP and she’d be working a job as a barista in west Nashville.

The truth is we have no idea who or what Maren Morris will develop into, and neither does Columbia Records Nashville, or possibly Maren Morris herself. And we won’t know until we hear a full-length album. She’s opened for Chris Stapleton and been booked on the Americana-leaning Camayo cruise. She’s also been spotted out there in an Old Dominion trucker hat, and has been confirmed for an opening slot on the upcoming Keith Urban tour. So who the hell knows what we’ve got here.

But for a lead single, “My Church” is not bad. Which is good, because it’s about to become ubiquitous.