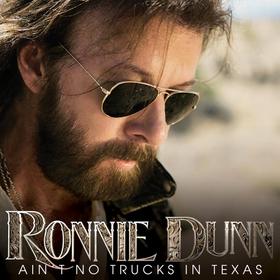 Trying to get a handle on Ronnie Dunn over the last few years has been like trying to catch a greased piglet. His rhetoric has been nothing short of revolutionary, but his artistic output has been a mixed bag at best. The former Brooks & Dunn member became disenfranchised by the Nashville system after his first solo release in 2011, and so he started a public relations crusade through his Facebook page, preaching about how unfair it is that aging artists get shuffled so unceremoniously to the side in the mainstream, and how country radio these days is replete with industry politics.

All of this resonated deeply with the aging country music fans who grew up on Brooks & Dunn and other country acts that over time have revealed themselves as much more country than critics believed in their era, especially compared to how off the page country has gone today. But when Dunn released his 2014 record Peace, Love, and Country Music independently, songs like “Kiss You There” and “Country This” seemed as pandering as anything from the new crop of artists. After Saving Country Music pointed out these inconsistencies, Ronnie Dunn himself addressed the concern:

SAVING COUNTRY”¦.One of my all time FAVORITE articles !!!

I agree with him about the contradiction grinding endlessly within ME and the MUSIC that I seek, so desperately to be a part of. This stuff is about more than just music.

I am beginning to believe that there may be no balance between mass accepted, mainstream music and sincere, heartfelt stuff with essence”¦ but again, I’m conflicted because songs like Believe, Red Dirt Road, Brand New Man, Neon Moon, She’s Not The Cheatin’ Kind and My Maria, just to name a few, seemed to do it on a mainstream level…

In the end I don’t have anything left to prove, I just like doing this.
I’m determined as ever to get this chapter right.

“This chapter” refers to the fact that Ronnie Dunn recently signed with NASH Icon—the joint venture between Big Machine Records and Cumulus Media—which charges itself with giving new life to country stars like Ronnie Dunn that still have a tremendous following and commercial appeal, but are being left behind by mainstream radio obsessed with youth. It’s a second chance, a second life in the mainstream. A lot of the concerns Ronnie Dunn has shared in his many Facebook missives will potentially be addressed by the emergence of NASH Icon and the possible split of the country radio format, so he makes a good candidate for the new venture.

But the music is what this always boils down to, and the question about Ronnie’s upcoming and so far unnamed NASH Icon release was if the songs would be any good? Would we get Ronnie Dun circa 1992, circa 2014, or something else entirely?

“Ain’t No Trucks in Texas” is our first taste of NASH Icon-era Ronnie Dunn, and it’s not that all unsavory. “Ain’t No Trucks” isn’t really a country song. Its blazing guitars and a subtle electronic beat right after the intro give it a new school flavor. It’s also hard to look at any song that has “trucks” in its title these days and not surmise it’s trying to get the attention of shallow mainstream listeners.

But “Ain’t No Trucks in Texas” is a breakup song at its heart, and one that’s hard to not feel the sway of, especially with the smart chord selection and the way the lyrics impact the listener, regardless of their list-like approach. This song is pragmatic. It utilizes some of the modes that speak to today’s country listener, but is nowhere close to a party song. And what’s for sure is Ronnie Dunn has always possessed one of the most powerful voices in mainstream country over the last 25 years, even though that was sometimes overshadowed by his duo member status.

There are certainly some things to take issue with in the production of “Ain’t No Trucks in Texas.” But you can’t discount the message and feel. And as long as these things are effective, it gives any song, regardless of the style, a fighting chance.

Sorry, no universally-accessible streaming player for this song is available at the moment, but if you do the Spotify thing, you can listen below.