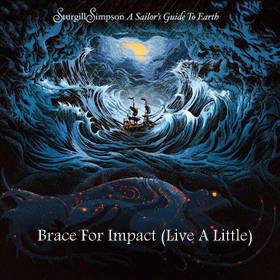 Everybody just take a deep damn breath. Breathe in . . . and then breathe out. Everything is going to be okay.

If you’re surprised that Sturgill Simpson is releasing non country songs, then you may want to question the true validity of your Sturgill Simpson fandom. Like all artists do when they decide to switch genres or “explore other sonic realms,” Sturgill was broadcasting his intentions loud and clear, darn near holding Roman candles in his hands while he screamed to the universe “my next album will not be exclusively country!” I’d post the litany of quotes and other evidence here from Sturgill that can be culled from a dozen or so media sources confirming this, but it almost feels redundant at this point. Sturgill Simpson walking away from the throne of “Country Music Savior” that so many well-meaning but uninformed media members have been trying to ensconce him in over the last couple of years has been the worst kept secret in music.

But for some reason, music fandom at large refuses to acknowledge the obvious about their favorite artists until they hear it for themselves in the music. I remember when Taylor Swift was doing everything short of leasing billboards to broadcast how she was going pop, yet popular media at large ignored all the signs. Justin Timberlake at this very moment is making a country record (or what he will call one), yet until popular media gets the official press release spelling it out for them, they will remain like the ostrich with its head in the sand, and so will Timberlake’s fans.

At this point, we shouldn’t even be listening to “Brace For Impact” in my opinion. Even more so than with most artists, Sturgill Simpson’s music is meant to be taken as a cohesive expression, with each song leading into the next on a purposeful timeline. All you have to do is listen to “Brace For Impact” and how it’s abruptly cut off at the end to understand this. Why did Sturgill and his team decide to release this song instead of another as the first single? It may not be because they think it’s the best, or the most representative of the album. It might be simply because it’s the one that works the best autonomously, even if it needs context to understand its true breadth.

“Brace For Impact” is not country (see above). So you know, get the hell over it. And I don’t want anyone bellyaching about how it’s hypocritical to not flamethrow Sturgill for putting out non country music when I’ve done the same to so to many other “country” stars making non country music. We’re all music fans first, and then our tastes break down genre lines. And just because something isn’t country doesn’t mean it isn’t good. And most importantly, Sturgill has been saying himself this music isn’t country, despite some not wanting to listen. That’s what separates him from the losers in the mainstream.

But just because “Brace For Impact” is not country, it still doesn’t give us any solid indication of just how country or not country his upcoming album A Sailor’s Guide to Earth will be. You can point to the cover of Nirvana’s “In Bloom” as an indication all hope is lost for country fans hoping for at least a few country songs. And I can point to his new version of “Oh Sarah” from his Sunday Valley days as an indication the album still could have some stellar country songs on it. Once again, breathe in . . . and then breathe out. Patience, grasshopper. In time, all will be revealed. And just how country Sturgill’s new album is will be a matter of fact and not speculation.

So taking all arguments of genre and shoving them to the side, what do we have with “Brace For Impact”? Well first, we have a sort of rocky, bluesy, sludgy composition with slide guitar that isn’t too far removed from country rock songs of old. Despite the concern Sturgill would release a straight up EDM album (stimulated by his own words, mind you), those fears have yet to materialize in any substantial manner, even if a little moog-like electronic treatment finds its way into the ending of the song to some extent.

The problem with “Brace For Impact” is that it’s sort of nondescript, and meanders without saying much, or really going anywhere. It immediately struck me as something that a director would select for a movie soundtrack. It’s more ambient than impacting, and without a clear verse/chorus/bridge structure or obvious melody to interrupt anything, it slides into the background.

What words there are all come at the beginning of the song, and speak to how we should live for today, as is iterated within the parentheses of the title. Though it’s the job of artists to help awaken us from the passing of everyday human events and live life while we can, the message of “Brace For Impact” feels a little trite. There’s no lyrical hook, and the lyrics are pretty hard to discern in the production. But the words don’t seem to be the point of the song entirely. It’s just as much about setting a groove, and evoking a mood. And “Brace For Impact” does that quite well.

Some folks (including country fans) will whine about the weirdness of the ending, but that’s arguably when the song becomes the most interesting and reveals the aims of the composition, even if it may be a little bit self-indulgent. But just like the words, the instrumentation of the song doesn’t allow for the display of any real brilliance or skill. “Brace For Impact” may be forward thinking for country, but that doesn’t necessarily mean it’s forward thinking. Like so many country stars giving EDM or rap a try, you can experiment all you want, but if you swim too far away from home, all of a sudden you’re a small fish in a big sea, and there’s sharks looming in those waters who’ve spent their entire lives honing in on how to be the apex predator of their realm.

Honestly, “Brace For Impact” is a little too nondescript to make me feel one way or the other, about Sturgill Simpson’s career direction, this new album, or even the song itself. It’s just sort of “there,” reinforcing my initial concern of listening to it out of context as being unfair to both the song, the album, and Sturgill. But there’s also nothing wrong with it as a song. So even after pondering in depth on it, I don’t really have a strong opinion about “Brace For Impact,” and I probably won’t listen to it again until I’m ripping through cellophane to listen to it with the rest of the songs in context, and no grade or ideas are fair to hold firmly to until that time.

Pre-Order A Sailor’s Guide To Earth from Sturgill Simpson, or on Amazon or on iTunes