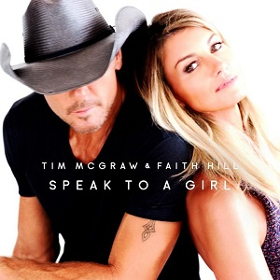 And it still might result in some favorable and lasting contributions to country music. Be a little patient with these guys. I have some confidence that good stuff will come. But “Speak To a Girl” feels a bit like a misfire, at least on the creative side.

“Speak To a Girl” is not a bad song, but it does a lot of the little things wrong. It starts off with Faith Hill singing, and she’s in a key that’s not particularly flattering for her range, especially since she’s trying to sing in these sort of hushed tones. It makes her part comes across as a bit throaty and jagged, especially for mainstream country which has fallen in love with these perfect, sweet, digitally-enhanced vocal tracks with no vibrato or emotion in the part. Having Faith sing in this sedated nature does lend to the atmosphere the song tries to capture, but the key seems to have been selected for McGraw instead of Faith. He comes in strong, while her part feels a little failing.

The imperfectitudes of Faith’s voice is where the ear focuses first instead of on the words, which may not be a bad thing. The very first line of the song, “She don’t give a damn ’bout yo Benjamin Franklins, she wants Aretha” is just unfortunate. First off, most listeners who aren’t inclined to frequent websites to read opinions about songs are probably not even going to pick up on what that line means. I’m sure the songwriters were high-fiving each other when they added this, but many of the nard-headed Bros blasting their local Cumulus country station at the stag party think Aretha is a scientific term for a part of the female anatomy. It’s just too fey a reference for anything other than the adult contemporary crowd, which is where this single is ultimately headed.

This is just one line, but the whole song seems somewhat fundamentally flawed in its logic, and in its delivery. The chorus of the song takes at face value that “woman” and “girl” are basically interchangeable, or at least part and parcel, when both hold strong and in some ways separate connotations. This song is supposed to be about respecting women, but one way you can disrespect a woman is by calling her a girl. Girls deserve respect too, but you can tell this song was written by three dudes (Shy Carter, Dave Gibson and Joe Spargur), and sort of misrepresents the female perspective on things in a fundamental way.

One major premise behind this song is that if you want to “get” the girl, you have to be super nice to her, that she doesn’t care about your money, or as McGraw says in the second verse, “your pride, or the lies that your hiding behind.” Bullshit. If you’re in a bar or some other social setting and want to get the girl, you’ve got to bring it. If you have money, flaunt it. If you have pride, show it. If you have humor, throw it down. This is Animal Kingdom 101 stuff. Of course there are exceptions, but the nice guy is usually one who ends the night with a visit to Porn Hub, not the bootylicious promised land. Nice guys all around the world wish it was different, but this is just the law of nature. You don’t have to be an asshole to get laid, but it certainly helps. And you at least have to be assertive. Yes, women want men to be nice, but only after the catch has been made.

There is something else that fundamentally erodes “Speak To a Girl,” at least as a country song. As mentioned above, two of the three songwriters are Shy Carter and Joe Spargur. These are not country music songwriters, these are writers from the R&B/pop world. Shy Carter is known best for his work with Jason Derulo and Meghan Trainor. He also worked on Faith Hill songs in the past, and had a hand in that terrible Sugarland single “Stuck Like Glue” a few years back that ostensibly killed that franchise.

Joe Spargur, who normally works under the pseudonym Joe London, has been a songwriter for Pitbull, Jason Derulo, and Fifth Harmony. He also worked on a few of the big songs on Thomas Rhett’s latest R&B record Tangled Up, including as one of 14 songwriters on the monstrosity known as “Vacation” (that ultimately failed as a single, btw).

Are you seeing a pattern emerge here? Over the last few years, these professional pop and R&B songwriters have migrated to the country music space, seeing it as fertile ground. This is fundamentally why we have seen this shift to so many R&B influences emerging in country music recently. Blame the performers for the dreck all you want, but it’s what is happening behind-the-scenes which is systematically reshaping the genre.

This trend affects “Speak To a Girl” in the way the annunciations work in the song. “Your” is purposely pronounced “yo,” and “she just wanna” replaces “she just wants to” in an attempt to give the song that hip, urban tincture, along with other inflections that fundamentally make this song more R&B than country, even if you don’t hear the obvious drum machines or other production elements indicative of more contemporary music.

There is nothing wrong with R&B music, or urban annunciations of words. What makes it a problem is when it’s passed along as country by R&B songwriters. Even though this may seem like what you’re doing is combining country influences with urban style, in reality what your doing is whitewashing all influences to where there is no distinct dialect to any separate form of American music. Whether you’re on the R&B or country station, the accents are the same instead of lending to a diverse tapestry of regional influences. And if you wanted to go there, you could even say this is an element of cultural appropriation. “Speak To a Girl” is a R&B song performed by country artists.

Lastly, “Speak To a Girl” makes the same mistake as many of these socially-conscious singles of late, which is being too overt and direct with its message until it comes across as preachy. Respecting women is a great directive to get across, and it’s even more important in mainstream country to attempt to counteract all the bad perspectives from Bro-Country. But it’s still better to deliver a message in the form of a story to personalize the impact. A song like “Speak To a Girl” has no arc. Neither did “Humble and Kind,” but that was what was kind of cool about it. But now that every other one of these socially-conscious songs is just giving up on the poetic nature of music and the importance of nuance, they’ve become pallid and divested from an emotional response.

All these concerns aside though, “Speak To a Girl” is fine. Of course it’s more slated to the adult contemporary crowd. This is the tag team of Tim McGraw and Faith Hill after all. The concerns with “Speak To a Girl” have to do with how the idea was flushed out, but the rationale is still sound.

How will it do commercially? If you look at the history of Tim McGraw’s last three projects, his lead singles have been under-performers. Usually the lead single is the one you expect to hit #1 if none others do, but the gravely unfortunate “Truck Yeah,” “Lookin’ For That Girl” and the mild “Top of the World” have all failed to reach the Top 10 on the Billboard Hot Songs chart. I could see “Speak To a Girl” being a little too sedated to do especially well, but with the appetite for new Faith Hill and the double star power of this new project with a tour to promote, Sony will definitely put what it can behind this single, which is more important than how it’s actually received by the public.

It’s fine to cheer for a song like “Speak To a Girl” because fundamentally the message is important. But as a song, it leaves a good amount to be desired.