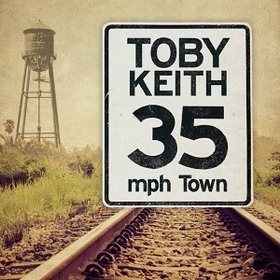 Toby Keith has given true country music fans plenty to hate him for over the years. From his opportunist to borderline offensive flag-waving odes, to completely stupid songs like “Red Solo Cup,” to having one of the first country rap songs in “I Wanna Take About Me,” he’s made himself into one of the most polarizing country music artists in history.

But Toby Keith’s polarization has never affected his pocketbook. In fact quite the contrary. Though Toby Keith feels like an artist whose commercial relevance is in the process of slipping out to pasture, he remains the highest paid country music artist annually, mostly from his executive role in record label ownership. Along with owning his own Show Dog Universal label, Toby also has a stake in Scott Borchetta’s Big Machine. That’s right, every time Taylor Swift sells a record, Toby Keith’s cash register also goes “ca-ching!” to the tune of taking in more cash than Swift in 2014.

Toby Keith and Scott Borchetta were once label partners that split early on, but as Borchetta’s Big Machine continues to add more and more divisions and artists, Keith’s Show Dog is in serious contraction. After losing Trace Adkins recently, Show Dog doesn’t even have a full roster anymore. But maybe the continued influx from Big Machine earnings continues to keep Show Dog and Toby Keith afloat, and just maybe, has given him the creative freedom here late in his career to do whatever he wants, regardless if it impresses country radio.

Toby Keith has a new album ready to be released on June 16th called 35 MPH Town, and the title track was released to radio in mid April. Just like the first single from the album called “Drunk Americans” written by Brandy Clark, Bob DiPiero, and Shane McAnally, “35 MPH Town” is something you traditionally wouldn’t expect to hear from Toby Keith, and something that probably won’t fare too well in today’s country radio environment.

Written by Keith with Bobby Pinson, the song tries to do something similar to “Drunk Americans,” which is make a statement about the current climate of society. Cutting completely against the grain of current country trends, as opposed to glorifying small town life as this idyllic full-time party of constant bonfire soirees beside bodies of water down dirt roads for bored suburbanites to live vicariously through, Toby Keith speaks to the reality of many of America’s small towns, where factory jobs have been vacated to China, the agrarian economy is in free fall, and most notably, methamphetamine is rotting communities from the inside out.

The protagonist of “35 MPH Town” bemoans how you no longer can leave your doors unlocked, kids can’t play out in the streets, and people stay “higher than the water tower” and there’s a “lower higher power” in a town where 35 is the posted speed limit.

Hats off for the attempt by Toby Keith to portray the realities of rural life as opposed to the corporate rendition, but the song overall doesn’t resonate with any real potency. “35 MPH Town” comes across more like “old people” yammering; “Kids get off my lawn” good old day syndrome instead of a true, heartfelt account gleaned from real life experiences or sentimentality. It feels like Toby Keith trying to be deep, but just coming across as sort of one-dimensional within the framework of what is really an overdone theme in country music, despite its absence from country radio lately.

Toby Keith addresses the symptoms, but not the cause. Why are 35 MPH towns facing these issues? As you listen you wonder to yourself, are things truly worse, or are they worse through the eyes of someone who is looking for things to complain about?

It is good to see Toby Keith effort to put something out there that is more than just a stupid drinking song or a pandering etude to the troops, and then to serve it to country radio even if it does eventually peak out in the mid 20’s on the charts and becomes an “also ran” in the greater scheme of things. It’s just a shame the effort wasn’t a little more inspirational and resonant, as opposed to judgmental and only skimming the surface of a very real dilemma plaguing America’s rural landscape.