Song Review – Tyler Farr’s “A Guy Walks Into A Bar” 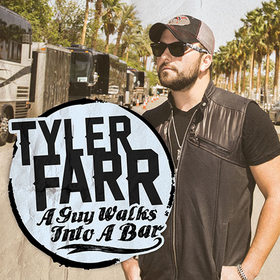 Last time I was paying attention to Tyler Farr, he was touching off a firestorm for singing about parking his truck in his ex’s yard and whipping beer cans at her window. Then Colt Ford and the cast of Duck Dynasty showed up in the video, machine gunning out rolls of toilet paper at this poor chick’s abode just because she finally figured out Tyler Farr had a big bag of nothing and gave him the boot. It wouldn’t have been possible for Tyler Farr to come across as more unlikeable. Even that guy from Staind, Aaron Lewis or whatever, was up Tyler Farr’s ass about how offensive the song was towards women. Sting’s “Every Breath You Take,” eat your heart out.

But you know, if you make it your business to share your opinions in a public forum, you better be willing and able to press the reset button on any artist and come to new material with an open mind. “Redneck Crazy” wasn’t written by Tyler, but a troika of professional songwriters like just about every country song is today. So whatever, I’m willing to give him another chance as long as he keeps the inferences to domestic violence on the down low.

Farr has a new record on the way later this month through Columbia Nashville, and ahead of it his opening salvo consists of a song called “A Guy Walks Into A Bar.” Once again written by three people, and none of which who carry the first name of Tyler, you immediately start to pick up on the disconnect between inspiration and delivery that plagues most of modern country. The punchline title could be easy to dismiss, or could reveal something a little deeper simply because it looks almost too clichÃ© as the title of a modern country song.

“A Guy Walks Into A Bar” is sort of a slow tempo ballad, and does a fair enough job of sucking you in with a cyclical story about the heartbroken getting spun through the turnstiles of life repeatedly. Farr’s voice doesn’t offer much character, but he does his best to lather the verses with as much emotion as he can. And the idea of the sick jokes life can play, and the way you and others can sometimes see your fate coming but can’t seem to control it, shouldn’t go unrecognized as achievements for the track.

But once again we have a country song that wants to rely on the story to drive it, but is only willing to commit two verses before doubling up on the catchy chorus to pander for radio play. Even the astutely-added bridge offers some space for a resolution or further insight, but instead it’s filled it up with a wank-off guitar solo. In general, the music of “A Guy Walks Into A Bar” is pretty terrible. It sounds like Tom Scholz of Boston shows up, turning his pick sideways to grate it down the fretboard and evoke visions of early arena rock, which is only fitting seeing how Farr’s backing band looks like it was platooned together from various Billy Idol tribute projects.

Tyler Farr’s vocals abilities are pretty average, and aren’t complimented by the fact that when he hits certain notes, he looks like he just stuck his face in a heavily soiled baby diaper. Not his fault, just saying. This all emphasizes once again that we live in a country world where ragingly average male singers are superstars, yet women can barely eek out 2 spins per hour. Cole Swindell now has more #1’s than Miranda Lambert, and Tyler Farr is on his way to his third Top 5.

“A Guy Walks Into A Bar” is like a really important PSA done by a professional wrestler. It’s not even that it’s disingenuous as much as it just doesn’t work as well as it should. It’s an emotional haymaker that only lands a glancing blow. I feel sympathy for listeners who find this song rating high on the “depth” chart of their musical ethos because there’s just so much better out there that doesn’t carry as much baggage along with it. “A Guy Walks Into A Bar” feels like three professionals brainstorming around a legal pad instead of a guy walking into a bar, coming to an aching realization, and pouring his heart out onto a whiskey-stained cocktail napkin.

But as easy as it is to use Tyler Farr as a whipping boy, this song isn’t Bro-Country, it does alright telling its story, and it does illustrate improvement from “Redneck Crazy” and other singles. Farr offers something a little different. It’s “little” difference mind you,  but if you’re moved by this song, that’s all that matters. My only point is there’s so much more out there that could move you so much more.