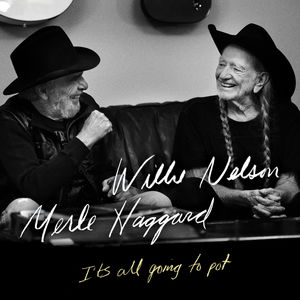 If 2013 was the “Year of the Song” and 2014 was the “Year of Sturgill Simpson,” 2015 may just go down as the “Year of the Collaboration.” Country music has a long history of duet songs and albums, and Willie Nelson has been a partner in many of them. But many times these twosomes take on the feel of 2nd class side projects meant as secondary listening to the solo albums of the participating artists.

What separates 2015 is we’re already seeing the results of when collaborations can equal something greater than the sum of their parts; the recently-announced Django & Jimmie album between Willie Nelson and Merle Haggard due out June 2nd included.

The Congress of the United States has yet to recognize 4/20 as an official national holiday, or that the possession or intent to distribute the leafy green is legal in all 50 states, but it made for the perfect excuse for Willie & Merle to release the first single from their upcoming collaboration called, “It’s All Going to Pot.”

Put aside your particular feelings on pot from a personal use or political standpoint and “It’s All Going to Pot” is a fun, finely written gem for Willie and Merle to kick back and forth and convey the warm feeling you get simply by seeing the weathered but happy faces of these two old friends making music together. Never mind the haze that permeates the air of Willie’s Honeysuckle Rose, both these old country veterans have their minds about them in this one, delivering one witty line after another.

Producer Buddy Cannon can be seen walking back and forth in the video if you’re not completely distracted by the gratuitous shots of Willie and Merle puffing away (see below), and the music fits the mood of the tune just fine. However the horn section feels just a little superfluous and outdated as it greets you at the beginning, and then shows up unexpectedly at the end.

Willie Nelson and Merle Haggard have far beyond surpassed the amount of skins on the wall one needs to be afforded the latitude to do whatever they want in music, but it’s only fair to point out that pot songs don’t much differ from songs that obsess over beer or whiskey, or whatever adult consumable you desire. “It’s All Going to Pot” conveys a little bit more story than your average modern-day beer anthem, and also redeems itself slightly from moral prejudice by panning the idea of pills. But let’s face it, it feels like if some had their way, Willie would become a one trick pot pony poster boy for the commercialization of marijuana; the golden arches of the green if you will, especially after the announcement of his own marijuana brand.

If we’re going to give Buddy Cannon’s other major studio buddy Kenny Chesney hell for releasing one beach song after another, Willie Nelson’s pot fetish sure has to be called into question too. As a percentage of his song output it’s still very low, but “Superman,” “Roll Me Up and Smoke Me,” and now “It’s All Going to Pot,” make for a pretty consistent pattern of singles.

Hats off to Willie for breaking down barriers by being so open about his admiration for marijuana, but let’s just remember Willie has written many songs, and done many things in his life and for country music beyond delivering one pot punchline after another.

“It’s All Going to Pot” is a fun listen that’s well written, and gets you buzzed for what the full Willie /Merle project may have stashed away.