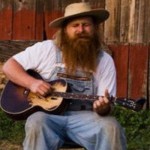 2011 will go down as the year of the “laundry list” or “checklist” song in country music, where imbecile, adolescent compositions stringing together well-recognized elements of country life like “ice cold beer” and “dirt roads” and “biscuits” beat us over the head to the point of submission in a transparent effort to appeal to a demographic who finds identity by living vicariously through anecdotic language.

2011 is also the year Willy Tea Taylor from California’s “Cowboy Capital” of Oakdale released an album called Four Strings, that as the name implies, takes a very minimalist approach to expose Willy’s eloquent songwriting. Four Strings is fabulous, and can be listen to and purchased for whatever price you decide to name on Bandcamp. But one song called “Life Is Beautiful” is so exceptional, it deserves to be given special attention.

The “laundry list” song formula doesn’t have to be used for the dark purpose of creating a corporate culture based on artifacts and behavior. Naming off artifacts of the country can be a great way to convey the beauty of life through illustrating it’s simplicity. Without question Willy’s “Life Is Beautiful” is a laundry list song; a laundry list song that schools all of it’s counterparts by simply being honest, and thankful. “Life Is Beautiful” is one of the best songs of the year, and not a better, more necessary year could it have been presented to us. It is a masterpiece, and if it doesn’t move you, then well, I just give up. So give up 4 minutes of your time, and change your life.

And exclusive concert featuring Willy Tea, along with The Boomswagglers and Tom VandenAvond will be broadcast on SCM LIVE on 11/11/11, Veterans Day,  from the Moose Lodge in Austin, TX.