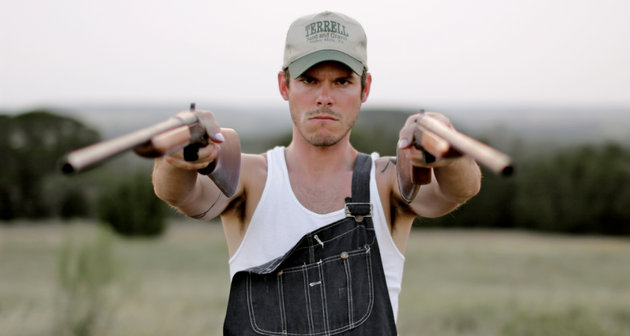 As hilarious as the Earl Dibbles Jr. debut video “Country Boy Song” was, and it was pretty damn hilarious, you had the sense this could be a bit that could get worn out quickly if it was overexposed. That’s may be why Earl’s real life alter ego Granger Smith has resisted putting out a full Earl Dibbles Jr. album or doing an Earl Dibbles-only tour. A few songs will leave you in stitches. Four or five might get to feeling tired pretty quickly. 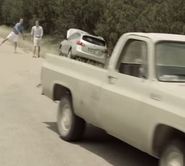 One of the funniest moments of the “Country Boy Song” video was when Earl Dibbles comes up on a couple of pastel-wearing “city boys” stuck on the side of the road in an imported compact sedan, and as he drives by in his truck missing the driver’s side door, he just shakes his head “no” at their requests to render aid.

It was so funny the first time and was mentioned in the lyrics of “Country Boy Song,” why not elaborate on it? That’s what Earl Dibbles Jr. does on “City Boy Stuck”—one of four songs featured on the recently-released Granger Smith 4X4 EP.

The problem with developing a simple country boy character whose life revolves around only a few simple activities (crackin’ cold ones, puttin’ a good dip in, huntin’ bucks, and fixin’ trees) is there’s only so much material to work with. As “City Boy Stuck” starts off, it feels like it’s going to be an uphill battle to keep you engaged with a lot of the repetitiveness from previous Dibbles offerings, and the similar approach to “Country Boy Song” in the musical structure. Becoming disillusioned with some of Granger Smith’s music as recycled Bro-Country also may not help matters.

But I’d be lying if I didn’t say that after about the first 30 seconds, Earl Dibbles Jr. had me rolling, and though I question if it’s fair to call it parody, Earl Dibbles does do a great job aping the city-hating, Democrat-hating, mud loving redneck like the one portrayed in this awful video and others. The miser in me couldn’t believe they trashed a perfectly good Prius as part of this video, but it’s the commitment to the video medium that has made Earl Dibbles Jr. an underground superstar.

Try to measure Earl Dibbles Jr.’s intentions (or Granger Smith’s) and you’re missing the point. Sit back and laugh and you’ll get exactly what you’re supposed to from this music.