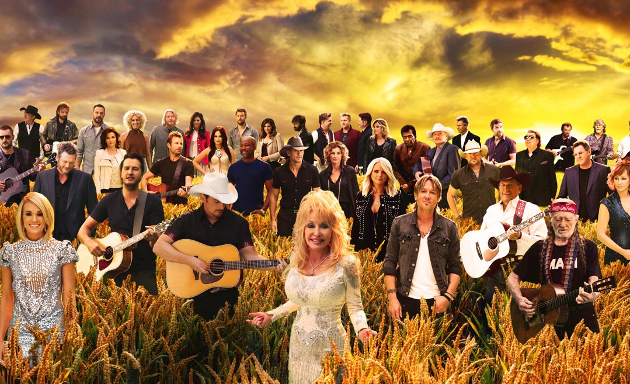 First off, I tepidly apologize for what was apparently a gross dereliction of my Saving Country Music duties for not having broached the subject of this song and video previously and punctually. I really didn’t think “Forever Country” was that big of a deal, and still don’t frankly. But according to the onslaught of emails and comments, many other folks feel quite the contrary, going as far as questioning the heart I bring to this effort after ignoring this subject for such an extended interval.

Screw me, but I just don’t have a strong opinion about this thing one way or the other. Sometimes that happens. If you think this song and video is amazing, then awesome. If you think it’s stupid, I can see that perspective too. In the end it’s kind of a wash for me.

Yes, it’s always cool to see country legends like Willie Nelson, Dolly Parton, Alan Jackson, and George Strait get some face time in mainstream channels. And it’s cool to hear three songs from the classic country canon get a spotlight shined on them (though two were just as much of the pop realm in their popularity).

But seeing and hearing Luke Bryan, Jason Aldean, and Rascal Flatts in what is supposed to be like a country music daydream turns it into a bit of a nightmare for me. It’s like a sexual fantasy, but then all of a sudden your mother is standing in the corner or something. It ruins the whole experience. Excuse me if I find it hard to celebrate the inclusion of some of the “Forever Country” participants in anything that is supposed to represent country music, though it is interesting that Florida Georgia Line was left out.

And I don’t care that this thing went #1 on iTunes, because I don’t care about anything that goes #1 on iTunes because the iTunes chart is so easily manipulated and is ultimately more like an anecdotal snapshot than a true barometer of interest. There’s a reason the be-all end-all industry music charts are tabulated on a weekly basis and not hourly.

And I don’t care if it does well on the Billboard charts either. The reason it appears that “Forever Country” has so much buzz behind it is because there are so many artists involved, and each one is pushing it through their social media channels, and so is the CMA which created the song and video. The CMA has never pushed anything like they’re pushing “Forever Country,” and that frankly adds to my apathy.

I don’t want to take away from anyone’s enjoyment of this song, if in fact they find any in it. That’s one of the multiple reasons I was trying to go radio silent on it. But I think it just feels a little too cheeserod to even grace with proper criticism. It’s like the country version of “We Are The World,” but without the creativity of actually composing an original song, or the production value of getting all of the artists in one place all at the same time. I know what Waylon would say about all of this, that’s for sure.

Boiled down, “Forever Country” is just an infomercial for the upcoming 50th Annual CMA Awards. The Country Music Association co-opted cheap or free celebrity talent for the project, and then put a silly video together. I half expected bluebirds to come fluttering down onto the shoulders of the artists as they sang. In some ways the video for “Forever Country” is symbolic for country music today. Where we once had true, organic collaborations, now we’ve got CGI bullshit superimposed over a song mashup. I wasn’t surprised at all to hear that Shane McAnally produced this.

But hey, the melody of “Country Roads” is one of the most infectious ever presented to the human ear, and so I understand how some could get steamy-eyed listening to this, seeing Randy Travis sitting there, and Dolly Parton offering her summation at the end. But it’s just not my bag. I’d rather watch or listen to a cool original song or video that doesn’t include random appearances by Rascal Flatts, thank you very much. It’s like putting peas in your Texas chili.