Around the passing of The Possum in 2013, I remember the news of his widow Nancy setting up an endowment and scholarship fund for Middle Tennessee State University, or MTSU, in the name of George Jones. What I didn’t know, and what has gone somewhat under-reported, is that the passing of George and the endowment encouraged the faculty of MTSU to enter a class on the life of George Jones into the school’s curriculum. That’s right, there’s a George Jones college course you can take, where you’ll learn all about what is arguably the greatest voice in country music of all time.

The first class for Possum 101 convened for the fall semester in 2014, and was taught by the accomplished songwriter Odie Blackmon. Some of Odie’s most recognizable cuts include George Strait’s #1 “She’ll Leave You With A Smile,” and Lee Ann Womack’s “I May Hate Myself in the Morning.” Billboard named him 2005’s “Hot Country Songwriter” and he’s been featured in publications as far ranging as The New York Times and American Songwriter. Odie regularly writes with Americana heavyweight Jim Lauderdale, and works with many young aspiring songwriters. So why would a man this decorated want to potentially take away from his bread and butter of songwriting to teach a bunch of college students who may or may not care about some some mutton-chopped country singer mostly popular in the last century?

I had to talk to Odie Blackmon, and ask him exactly how this George Jones class came about, and what stimulated him to teach it.

During the last Christmas break, I was being lazy, surfing around the internet, and I came across that MTSU was looking for a songwriter professor, and that it was a full-time, tenured track gig. I’d been teaching one class at Vanderbilt for the last five years. I’m at an age now where I still love songwriting, but there’s a real joy in working with young people and having something to give that maybe isn’t so appreciated on Music Row. I watched all the video of the ceremony at George Jones’s grave, and Nancy (George’s widow) had given an endowment to MTSU. And in the interview, Beverley Keel, who is a chairperson at MTSU, said she’d love to have a class on George some day. I heard that and thought, “Man, that would be a dream to be able to teach a class on George Jones.” So when I went to MTSU for the interview about the songwriting class, I told the hiring committee that if they were still interested in the George Jones class, “I’m your man.” This is what I love. So I got the gig as their songwriting professor, but I also got to teach the class on George Jones.

I got hired in the spring and had the summer to research and get ready, so I spent the summer really researching George Jones. I went down to the library archives and got a bunch of pictures from The Tennessean. I got in touch with Bobby Braddock, and Braddock was really shy about it at first, I guess maybe worried about protecting the legacy of the song, but he sent me the original demo of “He Stopped Loving Her Today,” and then a whole written history of how the song developed and everything that happened. I thought I knew a lot about George Jones, but I got to learn a lot more.

What can students expect from the George Jones class?

Well, we’re going to listen to a lot of music, and try to find out who George Jones was. The books that are out there on George, it’s kind of like Keith Richards’ book, or the Townes Van Zandt documentary. They glorify the demons, or they focus on them so much. It was a part of it. Art imitated life and life imitated art. But I didn’t want to go in to a bunch of college students and have them walk away thinking, “That’s how you become a great country music songwriter or singer.”

What I want them to understand was that George, who came from such a rough area like The Big Thicket in Texas, and had some shame from being poor and not ever being around the things he experienced in Nashville. He suffered from depression. His father was abusive. And I want them to see that what went into making this guy one of the greatest singers was a lot of that pain. But a lot of that pain and melancholy also caused a lot of his problems. They didn’t have the knowledge back then to know how to deal with it. It was more of a moral dilemma. It’s not to set the story straight. George did some bad things sometimes, and I’m not excusing him. But there’s a better way to go about it than, “Here’s another crazy story.” I was drawn to country music because of some of that. I related to it. But with George, I kept saying that if he was the greatest country music singer of all time, why aren’t we focusing more on that? 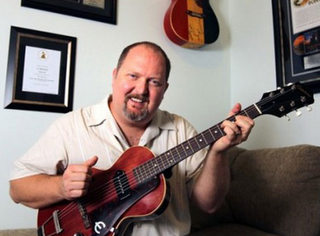 One thing people can expect in the class is that one night we listen to the recording of “Love Bug.” There’s ten takes of the song that they cut in Nashville. And then there’s about eight takes from out in L.A. And it’s so weird to hear how they were trying to find that sound to get to what we know today as the record. They had a really bad harmonica on it out in L.A. Listening to the record all these years, it makes you think, “What were they thinking?”

How is the course being received? How was it attended?

It filled up, which this first time was 18 or 19 students, and they’re moving me to a bigger room for the next one. There were some kids who kind of knew who George Jones was, there were a few that didn’t really have any idea, and I would say I had four hardcore kids that you could tell they grew up around his music.

One of the challenges was to put them in the mindset of the different times. Most of the kids knew about the Grand Ole Opry, but most of them didn’t know about the Louisiana Hayride. And so for me to give them the impression of what it meant to an artist to have that boost, I show them a video on the Louisiana Hayride, and we listen to some live performances. It’s getting them into the mindset that he didn’t have running water or a toilet inside when he grew up. Kids that are 19 or 20 today, it’s hard for them to relate to that.

In the first class they all did final projects because I thought it was a little weird to have a final exam that would be like, “What is George Jones’ birthday?” So they did projects, and one of my students did a presentation on George’s funeral that he went to and sat outside, camped out with his friends the night before, and so he had pictures and everything, and that was really cool. It’s interesting because a guy like George Jones could appeal to a country fan, or the hippest rock cat. I had one rock and roller in the class that I think really started getting into listening to a lot of old country because of it. And then I had another kid who was more into Americana, and for his final project he went out and rented a Nudie suit costume, and went to the barber and had his hair buzzed like a flat top like George, and showed up to class that night and sang “She Thinks I Still Care.”

I think they can tell that this stuff is important to me, that I’m trying to share with them something that I think is important.

You’ve had some major cuts with some big stars, and here you are deciding to take of your time when you could be trying to write more songs and trying to cut them, and instead you’re trying to reach out the youth of America and teach this class. Where exactly did that come from?

I don’t know, sometimes I think it’s stupidity (laughing). I’m from southern Arkansas, and when I left home I went to California because of the music like Dwight Yoakam and The Desert Rose Band and of course Buck and Merle, and Nashville just seemed a lot closer to Arkanasas, and California seemed pretty cool. But after the Rodney King riots I came to Nashville with this bullheaded passion that I like what I like. I’ve been put with publishers and tried to do what is demanded, but I’ve just never been one of those writers that cranks out a ton of tunes. I think I write a lot, but some cats write every day. All I’ve ever been able to do is follow my heart, and believe me, I probably could have made a lot more money.

We’re going through some major changes in our culture. It’s not just country music. It’s going to be a lot harder for young people to touch the old country music, and I realize I’m a link to it. I spent time writing a song with Harlan Howard and learned from him. I got here in time to reach out and touch some of it. Not a lot of it, but a little of it. And that’s something that I have to give. And to be honest, that stuff isn’t appreciated on Music Row, and it feels good that somebody wants to know about it, and I can help.

Like my buddy Jim Lauderdale who I write with a bunch and I’m good friends with, I’m not a performer, but Jim can write and do his thing in town, and he has his release of going out and doing his artistic thing. And he gets that satisfaction. Since I’m really not a great singer, teaching has given me that release.

Are you still writing songs?

Oh yeah. I took quite a bit of time off to get things rolling that first semester, but my plan is to write two days a week, and then Jim [Lauderdale] and I usually write on the weekend. Where I’m at right now I just want to try to write stuff I like and not be under any pressure from a publisher.