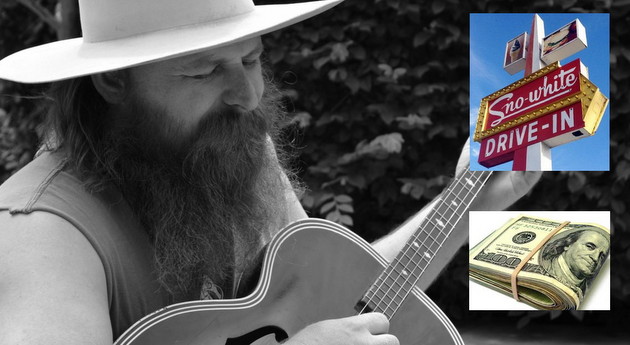 Many already knew that Oakdale, CA-based singer songwriter Willy “Tea” Taylor of the Good Luck Thrift Store Outfit was a world-class songwriter. And now he, his girlfriend Ericka Webber, and Willy’s 7-year-old daughter Rita Taylor are being hailed as world-class Good Samaritans after finding a bank deposit from a local restaurant that included a sizable amount of cash, and returning it to its rightful owner without touching a dime, or demanding a reward.

“It was my girlfriend’s birthday, and I had to borrow 40 bucks from a buddy to take her out to dinner,” Willy Taylor explains. “This car drove by and something flew off the roof and hit our van. It was dark, and I said, ‘Wow that sounded important’ because it was heavy and it came off the top of the car. It’s just a classic move. I’ve done it before, leaving stuff on top of the car. So I instantly said, ‘We should grab that,’ and so we pulled off on the side of the road and Ericka (Willy’s girlfriend) got out into kind of heavy traffic, and ran out in the middle of the road and picked up this binder and came back into the van. We opened it up and it was just full of cash. It was a pretty good amount of money and checks.”

The binder full of cash belonged to Anthony Borges—the owner of Sno-White Drive In on North Yosemite Avenue in Oakdale.

“We found a check made out to the restaurant,” Willy explains, and that was how they were able to track down the rightful owner. “We went out to dinner, had a little birthday dinner, and then the guy called us and met us at the restaurant, and at first he was like, ‘Is this for real?’ And then he said ‘What do we owe you?’ And we told him ‘Aw, nothing’ you know? ‘We’d just like to be friends. I’m just glad we found it for you. That was kind of a bad spot to drop that.’ He was real nice and insisted on giving us some money, and said ‘This is for your kids,’ and so finally we said ‘alright.’ It was just something normal to do, you know? People are kind of making a big deal out of it, but I’d imagine all of my friends would do the same thing.”

The incident happened back on February 25th, but it wasn’t until local newspaper The Oakdale Leader ran as story about the good deed that the news began to spread.

“I was going nuts,” restaurant owner Anthony Borges told the Leader. “I backtracked the whole way hoping to find it … They came down and delivered the entire thing. I asked them, ‘What do I owe you’ and he (Taylor) just said ‘Friends for life’.”

“Instantly, when Ericka goes ‘There’s so much money in here,’ my daughter says from the back of the van, ‘We are not keeping that!’ Just like that. And we laughed and said ‘Of course we’re not.’ But it was one of my proud moments. She’s 7-years-old and never been faced with a situation like that, and that was her first call. It’s really good to be faced in that situation, and not even one second think, ‘Oh my God we could really use that.’ It didn’t even cross our minds. We were just so happy we found that for them. We even tried to give the reward back the next day.”

Willy “Tea” Taylor released his latest solo record Knuckleball Prime on October 23rd. The album has also resulted in another fortunate turn of events for Willy, who is just as passionate about baseball as he is about playing music and helping people.

“Someone that either works in Cooperstown or works for the committee saw me play some baseball songs live somewhere,” Willy explains. “Then the label sent Cooperstown a copy of my new record and they said, ‘Yeah we know this guy already.’ So yeah, I’m playing Cooperstown on May 21 inside the Baseball Hall of Fame. I’ll play where Mickey Mantle spoke. I’m also putting a wiffle ball game together earlier that day because they know how much I like wiffle ball. I think it’s the committee against the staff of Cooperstown. I always though I was going to be a catcher in Cooperstown, but now I’m a folksinger in Cooperstown. I’ll take it.”

Willy will be embarking on an East Coast tour as part of his Cooperstown visit along with regular touring partner songwriter Tom VandenAvond. Meanwhile back in Oakdale, CA, he has a new set of friends.

“Great burger joint,” he says of Sno-White. “We eat there anyway. It’s a good spot. It’s an old fashioned drive-in with burgers and shakes. They’re real nice people. I’m glad it all worked out like that.”