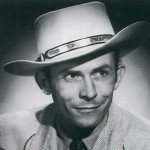 The Country Music Hall of Fame has just announced that on April 16th, 2011, they will honor Hank Williams in a special presentation called “I Saw The Light, Songwriters Salute Hank.”

I Saw the Light, which is presented in conjunction with the Museum’s exhibition Family Tradition: The Williams Family Legacy…will feature Rodney Crowell, Ashley Monroe, the Secret Sisters and Steve Young. During the program, which will be hosted by Family Tradition co-curator Michael McCall, each artist will perform one or more of Williams’ classic songs, as well as some of their own compositions that were influenced or inspired by Williams.  They will also discuss how Hank influenced their work.

The event is free with Hall of Fame admission.

The name I was most excited to see on this list was Steve Young, a forgotten country music Outlaw and songwriter who wrote Waylon Jennings’ “Lonesome, On’ry and Mean” and many other great songs. His most famous composition is “Seven Bridges Road”, which was recorded by Dolly Parton, Rita Coolidge, Joan Baez,  and was a big hit for The Eagles. He was also featured with Rodney Crowell in the Outlaw country documentary Heartworn Highways: