The main character in the 1998 Coen Brothers cult masterpiece The Big Lebowski—known casually as “The Dude” and played by Jeff Bridges—suffered from a pretty specific music ailment: an inexorable hatred for The Eagles. That might seem like a strange idiosyncrasy to assign to an individual, but one of the reasons it spoke to audiences so well is because over their successful run, The Eagles have assembled themselves some enemies. It’s inevitable when you have a band that is one of the biggest in popular music of all time that they’re going to draw some ire, especially when they’re known for softening the sound of others to make it appeal to the masses.

When I very first heard that Don Henley was releasing a country record, a rapid rolling of the eyes ensued. It was at that very initial moment when the idea sounded the worst. In a year when we’ve seen Steven Tyler, Bret Michaels, and even Uncle Cracker make country moves, it seemed like just another has-been name of rock coming into exploit country music’s popularity.

Then as I sat on it for a second, I decided that maybe it wouldn’t be so terrible. The Eagles certainly had their time delving into country sounds and their country influences. And ever since that initial trepidation, Don Henley has done nothing but tantalize us with one juicy nugget after another from this album to make us think that it could not only not be that bad, but it may even be halfway decent.

It was a quote here about how he didn’t want to cut corners with this record, a song release there with Dolly Parton where you’re blown away at how traditional and good the material sounds, and all of a sudden where Cass County started out seeming like a vanity project from a rusting adult contemporary rock star possibly looking for a career restart, it began to look like it could be one of the better releases of 2015. 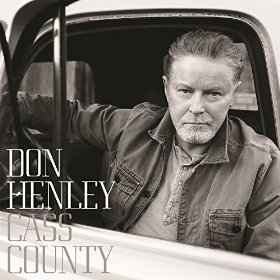 Whatever you could want or hope from Don Henley’s Cass County as a country music fan, this album delivers it and in ample quantities. I don’t know that any country fan’s expectations can meet the actual enjoyment this music deals out. And this is a traditional country record. Sure there are a couple of songs you probably wouldn’t consider country at all, and maybe a couple more that would be considered more contemporary country than classic. But overall, it’s totally worthy of claiming the traditional tag. I’m talking Don Williams type stuff: slow songs, steel guitar, great songwriting, and maybe especially, some of the best singing by all the parties involved that I’ve heard in a long time.

When Cass County was first announced, all the names thrown out there in the list of collaborators didn’t seem like an enticement, it frankly was worrisome. Oh, so this would be about star-studded duets instead of meaningful material—at least that’s the way it looked on paper. It reminded one of all of these recent Buddy Cannon-produced albums that have a bunch of double, and triple singing parts on records from Willie Nelson and others where the songs just became too busy to enjoy. The recent record with Willie Nelson and Merle Haggard is really fun, but you don’t feel like either man was at the top of his game vocally. If it was good enough, then it was good for the record.

Contrast that with what you have on Cass County, and it’s night and day. Merle Haggard said he was ready to tell Don Henley to kiss off after Henley was so insistent Haggard’s part must be perfect. I’m sure it wasn’t easy walking on the fightin’ side of The Hag, but his contribution to this record might be the best Merle has sounded in 20 years, and I’m not embellishing. It sounds like the Merle of old, and the message of “Cost of Living” was perfect for a Merle pairing.

Mick Jagger sounds unbelievable. It makes you salivate for the idea of a Jagger country release sometime in the future. Miranda Lambert finds a texture to her voice we rarely or ever get to hear her flaunt in her mainstream radio material. And Dolly hits a high note she hasn’t reached for since she was starring in 9 to 5. Don Henley pushed all of these singers to above and beyond their comfort zones, every one of them, and matched them up with material that played to their strengths. And not to be outdone, this might be the best Don Henley has ever sounded himself. He’s always been the squeaky one from The Eagles, but he challenged himself, and challenged others to defy their fear and age to make an album worth remembering, and listening to again.

It’s just kind of astounding how good Cass County is. Don Henley said he was going to make a country record inspired by his influences and upbringing, and that’s what he did. We’re just not used to this level of quality these days, or this level of uncompromising follow through. A tremendous amount of love and effort went into this record. This isn’t just another album, it’s Don Henley’s country album, and he wanted it to be memorable.

The songs of Cass County are excellent. Tift Merritt’s “Bramble Rose” is a perfect way to start off the album. Don and Dolly Parton’s duet on the old Louvin Brothers tune “When I Stop Dreaming” is breathtaking. Jesse Winchester’s “Brand New Tennessee Waltz” was a fun surprise, and one of the album’s few lighthearted moments. But some of the less recognizable material is just as strong, like the heartbreaking “Waiting Tables,” or the wisdom-filled “Too Much Pride.” What started out reportedly as a covers album ended up with a lot of original material. It’s been seven years since Henley has been a part of making any album, and fifteen years since his last solo release. He has plenty of money, and no expectations from a music world he’s already conquered. So he made a record out of love of music.

This isn’t a masterpiece mind you. I’m not saying we should save a place in the Country Hall of Fame rotunda for a Don Henley bronze. A couple of the songs felt a little meandering, like the divorce-inspired “Take A Picture of This,” but even some of the more contemporary stuff, like his duet with Martina McBride on “That Old Flame” ended up growing on me, strengthened by being nestled amongst the other material. Excellent harmony performances are turned in by Lucinda Williams, Alison Krauss, Ashley Monroe, and Trisha Yearwood. And songs like “Train in the Distance” and “Praying for Rain” reinforce the agrarian setting that Henley was looking to evoke with this very personal record.

For every time-tested Eagles fan, there’s someone like “The Dude” out there that will never give them or any of their solo projects a fighting chance. But if you’re into country, and I’m talking about real country, Don Henley has delivered an album that will challenge all others in 2015 to be placed on top of the heap.