Yesterday (1-6) the track listing and contributors for the second installment of the Waylon Jennings tribute “The Music Inside” was released to the public to a few grumbles from Waylon fans who were unhappy to see names like Colt Ford on the list, who is known for mixing country music with rap, and Justin Moore, who even legendary music journalist Chet Flippo who covered Waylon and the rest of the country music “Outlaws” back in the 70’s for Rolling Stone has inferred is a “fake Outlaw”.

Now Saving Country Music has learned from a reliable source close to Waylon Jennings’ estate that the estate has “distanced” from the choosing of some of the artists on the tribute, especially on the second disc. Waylon’s estate, made up of Waylon’s widow Jessi Coulter and his son and artist Shooter Jennings are said to have limited involvement in the project at this point, consisting of the tracks they have contributed themselves, and a few other “select choices”. Both Shooter and Jessi appeared on The Music Inside Vol.1 released in February, and Jessi appears on this second volume due out January 24th. 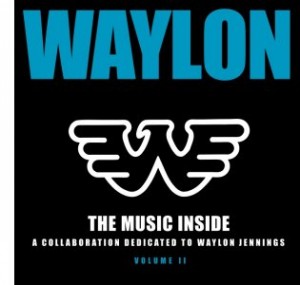 The Waylon Estate source also says the selection of the contributors has a lot to do with the labels releasing these volumes. Big Machine Records, Justin Moore’s record label released Vol.1, and label Average Joe’s Entertainment whose releasing Vol. 2 is home to Colt Ford and Montgomery Gentry. The Music Inside project is being managed by producer Witt Stewart (read interview with him here about the project).

There’s also questions about the timing of the release of The Music Inside, Vol.2. The series was always intended to be 3 volumes, and a total of 36 songs had been recorded by the time of the release of Vol. 1 in February. June 14th was supposed to be the release date for Vol. 2 (the day before Waylon’s birthday), and Vol. 3 was scheduled for October, along with a rumored “Christmas surprise” from the project. Now we won’t see Vol. 2 until late January, and physical copies won’t be available until February 7th. There is no updated release date for Vol. 3 currently.

Saving Country Music has learned the delay in the release occurred when the original label that signed on to release the albums, Big Machine, refused to release Vol. 2 after physical sales of Vol. 1 did not meet their expectations. Vol. 2 was picked up by Average Joe’s, but only with the stipulation that Colt Ford and Montgomery Gentry from their roster would be added as contributors. Justin Moore and Jewel were included to fulfill the project’s obligations to Big Machine, resulting in a list of contributors that looks to have more to do with Music Row politics than with who is best suited to pay tribute to Waylon Jennings.

Neither Jessi Coulter nor Shooter Jennings have come out publicly against the project, and SCM’s source close to the Waylon Estate says the family still supports the release of these volumes, but if it was left to them, a different set of contributors would have been chosen. Shooter has said in some recent interviews that he, “appreciates that the records have given a podium to many artists from many different walks of life to express their love of my dad’s music”.

Both Shooter and Jessi showed apprehension to the project at first before finally giving approval, as they explained to The Tennessean back in February when the first volume was released:

(Jessi Colter) “Frankly, sometimes it hurts my heart to hear someone do his (Waylon’s) songs.” All of which is part of why Colter was reluctant to green-light a series of three Waylon Jennings tribute albums”¦If Colter was reluctant to participate in such a project, Shooter Jennings was downright apprehensive … “I was leery of it, and even more guarded than my mom was. I’ve seen people with pure intentions and unrealistic goals, and I’ve seen people with agendas. And I’ve seen a Nashville system that will happily milk the ‘outlaw’ image of Waylon and other people, just so they can sell garbage.”