St. Paul & The Broken Bones Get Into “50 Shades of Grey” By Accident 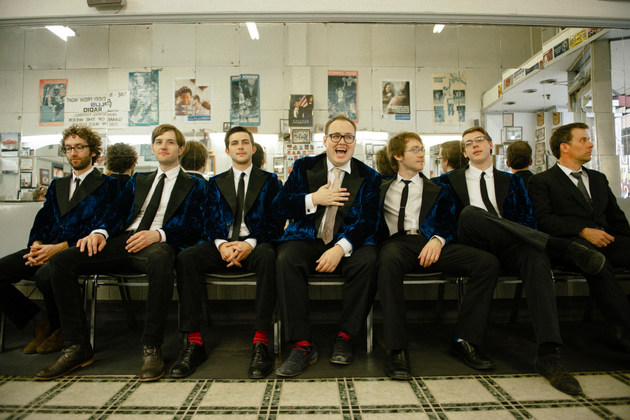 What in the world is a St. Paul & The Broken Bones song doing in that almost universally-panned softcore sex movie for lonely housewives called Fifty Shades of Grey? Chalk it up to a misunderstanding, but one that probably resulted in a big ‘ol check moving St. Paul’s way for the rights to be heard in what so far has been 2015’s big blockbuster, so more power to them.

“All right, my first ‘Fifty Shades of Grey’ question!” St. Paul frontman and snappy dresser Paul Janeway said when Mother Jones asked him about the strange soundtrack inclusion. “When they presented the licensing opportunity, they presented it as: It’s going to be a huge movie, they want to put a decent amount of the song in the movie in a nonsexual scene.”

“I knew it was a book, but I had no idea what it was,” Janeway continues, who also happened to learn to sing in a Pentecostal church..“I was like, sure, big movie, good exposure. I’ll be in this romantic comedy. Which is what I thought it was: a romantic comedy. It’s a good way to make money in the music business, you know. Then I saw a preview for it, and I was like, ‘Oh, shit. Oh, no. What have I done?'”

“To me it’s kind of funny,” he says. “I’m glad it’s in a nonsexual scene to be honest with you, not for my sake but for my family’s sake. I don’t have any moral things about it. It’s not like we’re in the movie it’s just a song for a minute.”

The song in the Fifty Shades soundtrack is St. Paul & The Broken Bones’ well-recognized hit “Call Me.” So hey, at least Fifty Shades viewers will be exposed to some culture during their music viewing experience.