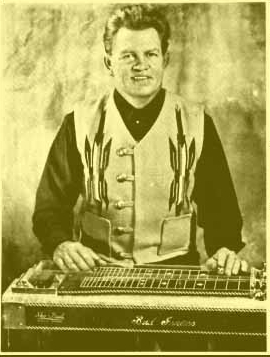 Bud Isaacs wasn’t just a steel guitar player, he was the man who revolutionized the instrument by adding the foot and knee pedals that allow the steel guitar to change the pitch of singles strings as opposed to having to change to a different chord all at the same time. This made Bud Isaacs and other steel guitar players the musical wizards of the day, able to emulate the moans and yodels of country’s legendary singers with the steel’s mournful tone.

Born March 28th, 1928 in Bedford, Indiana, he began to play steel guitar on local radio stations at the age of 16, eventually heading to Nashville and performing on the Grand Ole Opry with Eddie Hill, and later in Jimmy Dickens’ Country Boys. Webb Pierce’s 1954 hit “Slowly” was the first major song to feature Bud Isaacs’ new take on the steel guitar, and it revolutionized the instrument, and country music with it.

In 1955, Isaacs became an official member of the Ozark Jubilee, and regularly performed with star Red Foley on the program. Also in 1955 Bud played on all 11 of the top country hits of that year, speaking to his influence, and how in demand his playing was.

Isaacs also played as a solo performer, and recorded for RCA for a short time, including the favorite “The Waltz You Saved For Me,” and his signature song, “Bud’s Bounce.” Bud Isaacs’ credits and the artists he played with are too numerous to list, and he also performed in the Golden West Singers with his wife, yodeler, and bass player Geri Mapes.

As country began to contemporize, there was less work for Bud Isaacs and he eventually retired in Arizona. According to Rick Jackson, Isaacs died on Sunday, September 4th at 11:00 a.m. Bud will be cremated, and a memorial service will be held at a later date. Cards can be sent to Geri at 12461 E. 38th Street Yuma, AZ 85367.