The Kentucky native who’s been making waves throughout country music over the last year with his award-winning album Metamodern Sounds In Country Music has signed to Atlantic Records, part of the Warner Music Group, and will release his next album currently being recorded through the major label. The announcement was first made by Atlantic somewhat inadvertently on January 7th when they published a missive about their signed artists scheduled to play the Coachella festival in California, and included Sturgill Simpson’s name. Atlantic has also been including Sturgill’s name in other industry materials, leading to speculation in recent days the songwriter had signed with the label, though nothing was made official until today.

Sturgill Simpson released his first two solo records through Thirty Tigers—a distribution company that allows artists to own their own record labels. The move to Atlantic will mean an entirely new world of support behind the resurgent country artist who is up for a Grammy for Best Americana Album in February. 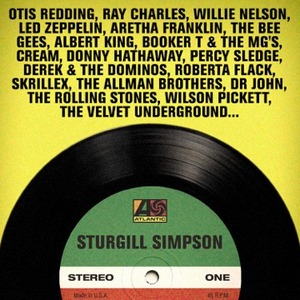 Though none of the specifics of the deal have been disclosed, sources tell Saving Country Music that Sturgill Simpson went with Atlantic after being courted by numerous major labels. Atlantic made him an offer that included what he wanted, including allowing him to retain creative control over his music. Though Atlantic is a major label and does business in multiple genres, they may approach Sturgill more like an indie rock act since his music doesn’t fit in the mainstream country box. That is one of the reasons Sturgill is being featured at many of this upcoming summer’s major mixed genre festivals such as Coachella and Bonnaroo. Sturgill is also playing the country version of Coachella called Stagecoach the weekend before.

Signing with Atlantic has some poetic undertones for Simpson. In late 1972, Willie Nelson was looking for a way out of his RCA contract so he could gain more creative control over his music like many of the rock and roll artists of the day. Lawyer Neil Reshen was able to get Willie out of the RCA deal, and Willie signed with Jerry Wexler as the very first country artist on the label. Willie met Wexler at a guitar pull in Nashville, and after Wexler heard Willie sing “Bloody Mary Morning,” he introduced himself and said he wanted to release Willie’s next album. “I have been looking for you for a long time” was Willie’s prophetic response. Nelson released Shotgun Willie and Phases & Stages through Atlantic.

Simpson has recently been in the Sound Emporium studio in Nashville working on what will be his third solo release with producer Dave Cobb. No word as of yet for a title or release date for new music.