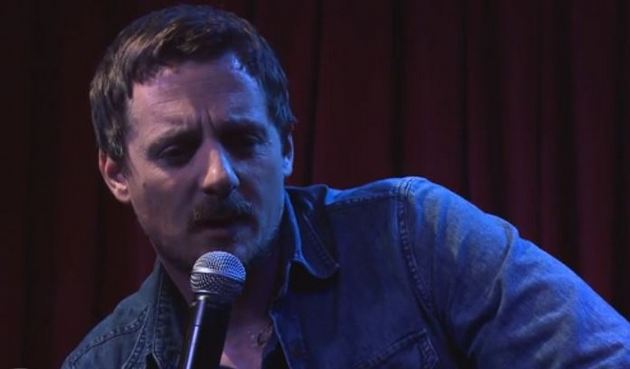 This story has been updated (see bottom)

Well, this is a side of Sturgill Simpson we haven’t seen for a while. But one that is completely valid as a close, personal friend of Merle Haggard during the country legend’s final years.

Last week, the ACM created a new award called the ‘Merle Haggard Spirit Award’ that was said to honor the contributions of Haggard by acknowledging artists who exemplify his uncompromising integrity and “singular vision in carving an indelible path in country music.”

“Merle passed shortly after our 2016 awards show and after this year’s Special Awards were announced,” says ACM Board President Ken Tucker. “That said, there was simply no way the Academy could hold what may be its most heartfelt event — ACM Honors — without creating a lasting way to acknowledge his legacy.”

It was announced Monday morning (8-29) that Miranda Lambert would be the inaugural recipient of the award.

Some may have noticed, despite including the name of a country legend, Saving Country Music had not mentioned this distinction as it could be considered a little disingenuous coming from the mainstream country music establishment. That is exactly how Sturgill Simpson took it, and slammed the award Monday morning in a statement.

Many years back, much like Willie and Waylon had years before, Merle Haggard said, ‘Fuck this town. I’m moving.’ and he left Nashville.

According to my sources, it was right after a record executive told him that ‘Kern River’ was a bad song. In the last chapter of his career and his life, Nashville wouldn’t call, play, or touch him. He felt forgotten and tossed aside. I always got a sense that he wanted one last hit..one last proper victory lap of his own, and we all know deserved it. Yet it never came. And now he’s gone.

I’m writing this because I want to go on record and say I find it utterly disgusting the way everybody on Music Row is coming up with any reason they can to hitch their wagon to his name while knowing full and damn well what he thought about them. If the ACM wants to actually celebrate the legacy and music of Merle Haggard, they should drop all the formulaic cannon fodder bullshit they’ve been pumping down rural America’s throat for the last 30 years along with all the high school pageantry, meat parade award show bullshit and start dedicating their programs to more actual Country Music.

Along with twisting off on the ACM’s, Sturgill also took the opportunity to take on Garden & Gun magazine, after they promised Sturgill that Merle Haggard would be on the front of an issue in which he appeared in an interview with Merle. However at the last minute, the magazine put Chris Stapleton on the cover.

He was so excited about it and it goes without saying that I was completely beside myself along with my Grandfather who has always been a HUGE Merle fan. We spent the whole day of the interview visiting in his living room with our families and had a wonderful conversation with the journalist. Then we spent about two hours outside being photographed by a brilliant and highly respected photographer named David McClister until Merle had enough…he was still recovering from a recent bout of double pneumonia at the time and it was a bit cold that day on the ranch.

But then at the last minute, the magazine’s editor put Chris Stapleton on the cover without telling anyone until they had already gone to print. Don’t get me wrong, Chris had a great year and deserves a million magazine covers…but thats not the point.

Its about keeping your word and ethics.

Chris also knows this as he called me personally to express his disgust at the situation. Dude’s a class act.

The editor later claimed in a completely bullshit email apology to both Merle’s publicist and ours (Chris and I share the same publicist) that they didn’t get any good shots that day.
David McClister..
2 hour shoot..
no good photos..
OK buddy,..whatever you say.

Though Sturgill was apt to go off on the country music establishment earlier in his career, he recently has been playing a much more docile role. Sturgill is even being slowly accepted by the Nashville establishment. It was announced last week that he is being considered for three categories at this year’s CMA Awards. But that won’t stop him from speaking his mind.

“Some days, this town and this industry have a way of making we wish I could just go sit on Mars and build glass clocks,” Sturgill says.

After some misguided assumptions that this morning’s rant was directly against Miranda Lambert, Sturgill has clarified his statements to make sure she is not caught in the crossfire.

Shortly after I initially posted this it was announced that Miranda Lambert would be the award recipient.
Before people start chasing clickbait by putting words in my mouth I feel the need to clarify that I was not aware of this at the time of my original post and my words were in no way directed at her. I know that Merle liked and respected her so it’s good to see there is at least some blue sky in all of this.
I don’t know Miranda nor have I ever met her but something tells me that in her heart, she knows I’m dead on.

He also said he understood that the ACM’s were initially set up to help West Coast artists like Merle Haggard, and also clarified what his plans are for the CMA’s vis a vis his current consideration by the organization for their upcoming awards.

Whether or not I am nominated for a CMA award this year, I will not be attending the ceremony for no other reason than the fact I already have a sold out show scheduled in Des Moines, Iowa on the night of the awards ceremony and I have no plans to change that.