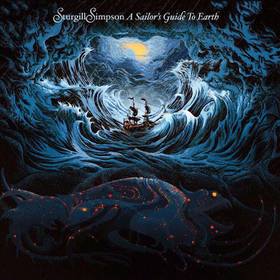 Sturgill Simpson’s A Sailor’s Guide to Earth is officially the #1 record in country music, and is also the highest-charting debut of the week at #3 on the all genre Billboard 200 chart. It also charted #1 on Billboard‘s Rock Albums and Folks Albums charts. A Sailor’s Guide sold a total of 55,000 album units, including 52,000 in pure album sales to take the top spot in country. The only thing keeping Sturgill from the top of the Billboard 200 were two surging titles from Price that sold like crazy in the hours after the superstar’s death. The Very Best of Prince sold a total of 179,000 units, and Purple Rain sold 69,000 on the final day of the chart report to take the #1 and #2 spots.

The distinction also marks Sturgill Simpson’s first record to chart in the Top 40 of the Billboard 200. His previous record, Metamodern Sounds in Country Music came in at #59, and #8 on the Country Album chart. A Sailor’s Guide also debuts at #1 on Billboard’s new Vinyl Albums chart, selling over 9,400 vinyl copies.

Sturgill Simpson is just the artist with virtually no mainstream radio play to crest the Country Albums chart. Blackberry Smoke, Aaron Watson, and Jason Isbell have done it previously, along with a host of country legends who haven’t heard their songs on the radio in years. Simpson’s latest record bests on of his best friend’s releases, Jason Isbell’s Southeastern, which hit #1 with about 45,000 records sold in the first week.

Though we knew late last week there was a good bet Sturgill Simpson would sell through well, the questioned remained if Billboard‘s editorial staff would even consider A Sailor’s Guide to Earth for the country charts after Texas country band Green River Ordinance was withheld from the chart earlier this year under circumspect reasoning. A Sailor’s Guide does have some country moments, but is more of a rock and soul album. But Sturgill’s history with the genre did him well, and now he has to be considered a strong contender for Grammy nominations later in 2016.

Sturgill Simpson heads out on tour in May.