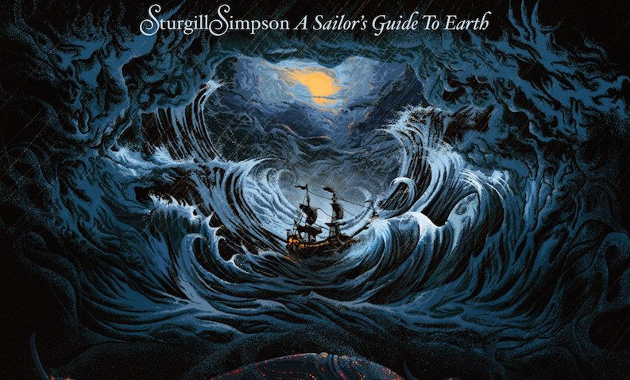 On February 12th, Sturgill Simpson’s latest record A Sailor’s Guide to Earth will be up for two of the Grammy Awards’ biggest distinctions—Best Country Album, and Album of the Year. But in a new detailed report about the Grammy nomination process, it has been revealed that A Sailor’s Guide was almost stricken from contention for Best Country Album for not being country enough. The same report also lays to rest the speculation that A Sailor’s Guide was allowed to cut in line in front of more commercially-successful projects for Album of the Year consideration due to a controversial “wild-card” provision in the nomination process.

According to Billboard‘s deep dive into the world of the Grammy Award’s Blue Ribbon Voting Committees made up of secret members, writer Chris Willman says, “Sources with knowledge of the discussions say Simpson … stirred up quite a bit of debate in both the all-genre and country committees—particularly the latter, where some members of the Texas and Tennessee chapters were at odds over whether ‘A Sailors Guide to Earth’ even qualified as a country album.”

This point is important for a number of reasons. Even many of Sturgill’s own fans have asked if A Sailor’s Guide is country enough to be considered in the Grammy’s Best Country Album category, and just like many of these fans, the Grammy committee ultimately decided it was. Even though the result was in the affirmative for A Sailor’s Guide, it does show that within the Grammy nomination process, there is strong consideration, and even at times dissent, about what should be considered country or not, even for critically-lauded performers like Sturgill Simpson who are from Nashville, have spent the majority of their careers in country music, but put out a record that blends in other influences with their country roots.

The fact that the Grammy committee considered turning down A Sailor’s Guide for Best Country Album shows how stringent the litmus test is for these country categories. This is important because of the controversy that erupted after it was revealed that Beyoncé’s song “Daddy Lessons” was turned down by the same committee for not being country enough. Charges of unfairness and even racism have even been levied at the Grammy Awards for denying “Daddy Lessons” the opportunity to compete for Best Country Song, but the fact they also nearly turned down Sturgill speaks to a nomination process not governed by race or elitism, but a strong interpretation of genre—even if Keith Urban’s very non-country album Ripcord somehow received a nomination for Best Country Album as well.

Also in Billboard‘s Grammy piece is confirmation that Sturgill’s A Sailor’s Guide to Earth did not get it’s Album of the Year nomination from a push by committee members to feel like they needed to add a critical underdog to a category loaded with commercially-successful projects in 2017. Other nominees in the category include Drake, Adele, Beyoncé, and Justin Bieber. The Grammy Awards do have a “wild card” clause that allows Blue Ribbon committees made up of secret members to nominate an album or song for a category not voted on by the wider Grammy membership if they believe it has been unfairly underrated by the voters, or is expected to perform dramatically better in the months leading up to the Grammy’s, i.e. a late bloomer that still fits within the eligibility window.

The Grammy nomination process has fallen under elevated scrutiny in 2016 for numerous reasons, including the Sturgill Simpson Album of the Year nomination, Beyoncé’s denial in the country category, and concerns about the quality of the Americana nominees among other criticisms. Nonetheless, The Grammy Awards still remain one of the few major awards shows in America that regularly nominates and awards artists due to quality instead of commercial performance.

“We specifically instruct committee members to avoid any discussion or consideration of sales and chart positions, and just to use their expertise, their ears and, I guess, their hearts.” says Bill Freimuth, the Recording Academy’s senior VP of awards.

And the hearts of Grammy voters apparently believed that Sturgill Simpson’s A Sailor’s Guide to Earth belonged in the conversation for the best album released in the last year.