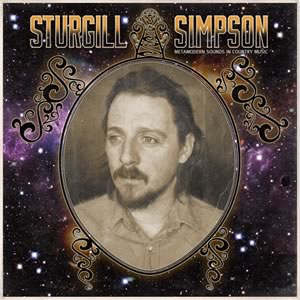 We’re less than a month away from the release of critically-acclaimed rising country star Sturgill Simpson‘s sophomore solo release called Metamodern Sounds in Country Music on May 13th, and the album has now been made available for pre-order on CD or vinyl and Sturgill has released the first single from the album “Turtles All the Way Down” on iTunes and Amazon. He’s also just premiered the video for “Turtles All the Way Down” through NPR (see below).

“I just reached a point where the thought of writing and singing any more songs about heartache and drinking made me feel incredibly bored with music,” Sturgill tells NPR. “It’s just not a headspace I occupy much these days. Nighttime reading about theology, cosmology, and breakthroughs in modern physics and their relationship to a few personal experiences I’ve had led to most of the songs on the album.”

Don’t get too flipped out country fans, Simpson also told The Washington Post that he grew up with his grandfather religiously watching Hee-Haw, and being obsessed with Waylon’s Dukes of Hazzard theme. This strange dichotomy is what gives Sturgill Simpson his unique brilliant streak that shines through in his music that is both fiercely traditional and forward thinking. “I expected to be labeled the ‘acid country guy,’ but it’s not something I dwell on,” he tells NPR. “I would urge anyone that gets hung up on the song being about drugs to give another listen … to me “Turtles” is about giving your heart to love and treating everyone with compassion and respect no matter what you do or don’t believe. The cosmic turtle is from a much quoted story found in publications throughout modern physics and philosophy, even ancient theology, that now essentially serves as a comedic picture or expression of a much grander idea.”

Read The Entire NPR Interview & Watch the “Turtles All the Way Down” video.

Metamodern Sounds In Country Music, pre-order, Sturgill Simpson, Turtles All the Way Down