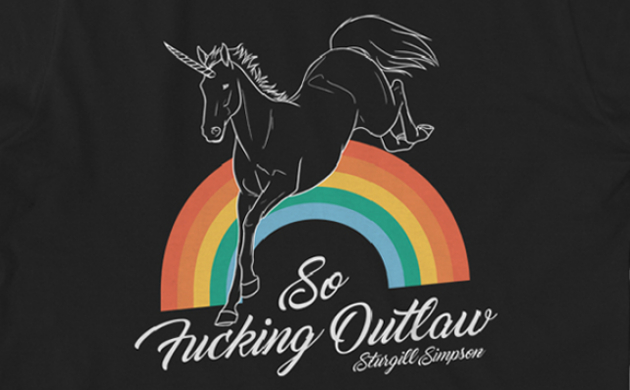 It’s pretty rare that a piece of an artist’s merchandise accoutrement is worthy of a broad discussion or deep analysis into its intrinsic meaning. But leave it to Sturgill Simpson to stupefy some, intrigue others, and leaving something so open to interpretation as he’s done with a T-Shirt he’s been hawking at recent shows emblazoned with “So Fucking Outlaw” and a unicorn leaping over a rainbow. It’s frying some people’s brains, while others are waiting 20 minutes in the merch line to buy 3 of them.

Look, if you think that Sturgill is so lacking in self-awareness that he’s trying to flatter himself by proclaiming himself “So Fucking Outlaw,” or even professing an allegiance to Outlaw country subgenre in any way, then likely large swaths of the singer’s music and actions recently have passed right over your head. Whether it’s irony, sarcasm, or whatever you want to call it, it appears Simpson is trying to contrast the often bellicose machismo of Outlaw country with effeminate imagery. He’s fucking with people here, or at least that’s my interpretation.

The T-shirt appeared recently as Sturgill Simpson hit the road as part of Willie Nelson’s traveling Outlaw Music Fest put together by Blackbird Presents. Like so many other recent endeavors in country music, Blackbird is using a very loose interpretation of what constitutes a country music “Outlaw” for marketing purposes. Though it’s incorrect to deduce that a country music Outlaw must be some hard edged, drug-induced Waylon impersonator when the term has more to do with fighting and winning creative control of your music, casting Outlaw Music Fest performers like Van Morrison and Edie Brickell with the term is pretty circumspect at best. Of course Sturgill Simpson once said the most Outlaw thing a man could do is give a good woman a ring in his song “Life Ain’t Fair and the World Is Mean.”

So perhaps Sturgill is making some playful jab here at the application of “Outlaw,” while also showing an underlying respect for the term, and simultaneously attempting to erode much of the bellicose machismo behind it. The shirt will go right beside the “Who The Fuck is Sturgill Simpson?” line that made an appearance on merch tables right after Sturg was nominated for Album of the Year with Beyonce, Adele, Justin Bieber, and Drake at the 2017 Grammy Awards. It’s a novelty, but it’s one that might give just as much insight into Sturgill Simpson’s attitudes and temperament as many of his songs, regardless of your personal interpretation.

UPDATE: In 2014, Sturgill Simpson gave an interview to The Fader in which he said, “If you really want to be an outlaw today, you might as well print up T-shirts with unicorns and rainbows on them. The whole machismo bravado thing has to go away man. It’s so tired and postured. There’s a lot of bullshit.”

So there you go.