SUSPENDED: The Midnite Jamboree in Jeopardy

***NOTE: This story has been updated. Earlier reports citing that the Ernest Tubb Record Store near the Grand Ole Opry has been shut down were incorrect. Also new information has come to light about the financial status of the Midnite Jamboree. To read the updates, CLICK HERE.

”The 68-year-old Midnite Jamboree radio show is suspended due to financial reasons.

”A “Midnite Jamboree Association” has been created to save the radio show. 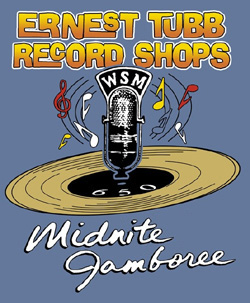 A cultural institution of the country music world and the second longest-running radio show only to The Grand Ole Opry is in serious trouble. The Midnite Jamboree, a Saturday evening staple for over 68 years started by Ernest Tubb is in danger of shuttering after its historic run due to a lack of funds, and folks are banding together in attempt to rescue the show.

On Friday (3-27) the owner of the Ernest Tubb Record Shops David McCormick was forced to suspend the Midnite Jamboree that broadcasts from the Texas Troubadour Theatre. The free show has been broadcast on WSM after the Grand Ole Opry since 1947—originally from the location on Commerce St., then later at the Ernest Tubb Record Shop on Lower Broadway before moving to the Troubadour.

“We’re in a dilemma right now,” says Glenn Douglas Tubb, a legendary songwriter and the nephew of Ernest Tubb. “David [McCormick] called me a couple of days ago and said he had to suspend the Midnite Jamboree and he’s had to close the record shop out by the Opryland because there’s just not enough business anymore. They’re downloading their music off the internet now. They quit buying records and that was what was supposed to support the Midnite Jamboree when Ernest started it back in 1947. For the last several years, David’s had to pay the expenses out of his pocket. He was pretty well off at one time, but now he’s broke. We just need to get him some help.”

David McCormick is said to be heartbroken over having to suspend the show, but is too distraught to solicit for help himself. So Glenn Douglas, who frequently performs and hosts Midnite Jamboree sessions, is taking the lead in helping to save the country music institution.

“It started on Commerce St. in 1947, but very shortly after that we had to move it to Broadway. But the crowds got so big down there, they spilled out into the street,” Glenn explains. That is why the Midnite Jamboree moved to its most recent location near the Grand Ole Opry. “When the theme park was out there, that place was full all the time, and all the businesses around there were full. Since they tore the theme park down and put a shopping mall there—people don’t come to town to go to your shopping mall. They come to be entertained.”

“I’m happy to see it,” Glenn says about the vinyl resurgence. “I hope it really starts to build and people fall in love with the LP’s with the good artwork on the covers and the liner notes. It used to be more than just the record. I’m hoping it will come back to that because all of us songwriters have really been impacted by the internet. I’d say we’ve lost about 98% of our income. Of course the publishing companies and the record companies and the performers have lost a bunch too. The internet is wonderful. My wife and I are in the ministry and we use the internet as a tool to reach out. We broadcast our little church service all around the world. But it really killed me as a songwriter. I’ve been writing since 1952, and I did pretty good for a long time, but it’s all gone now. Songwriting is just a hobby now.”

“We try to keep Uncle Ernest’s name alive as much as possible because he did so much for this business, and he was such a giving person,” Glenn continues. “He made millions of dollars when he was alive, and he gave every bit of it away. When he died, he was broke. And he had the biggest heart of anyone I ever saw. He helped so many people. He didn’t have a jealous bone in his body. He didn’t care if these young whipper snappers came along and sold more records than he did. If it was good for country music, he loved it. And he did all he could to support everybody. And the Midnite Jamboree gave a whole bunch of them a leg up on that ladder of success, everyone from Elvis Presley on down. Elvis wasn’t country, but he was a country boy to start. I remember the night he came down there. He was just a skinny little kid with a pink coat and some black britches with a pink stripe down the leg. I remember in 1947 when [the Ernest Tubb Record Store] was still on Commerce St. that Tennessee Ernie [Ford] showed up before he got real famous. I remember him having a fishnet shirt on, and he was as hairy as an ape, and that hair was sticking out of that fish net and I thought, ‘Goodness gracious, what kind of guy is this?'(laughing)”

“The oldtimers, they’re happy to come. The new ones don’t care anything about it,” says Glenn Douglas Tubb. “Garth Brooks was the last one of what I call the newcomers that played. He just had his first record out when he came over and did the show. Boy he was very humble, and very proud to be there, and I have a lot of respect for him because he still is like that. I can’t say anything bad about Garth.”

Currently owner David McCormick is looking for a new location to host the Midnite Jamboree, while also trying to craft a long-term solution to how to put the radio show on sure financial footing.

“We could probably get the expenses down if we didn’t have to pay a big rental fee for the venue where we broadcast. That’s what I’m hoping we can get done,” says Tubb. “We’re trying to move it back to Broadway where it started. Frankly I’m kind of happy to see the thing come back to Broadway because that’s where all the tourists are. But I hope if we can get enough money together, David has the building down there on Broadway where the record shop is down there, and it’s got an upstairs that could be renovated and made into a concert hall where we could broadcast the Midnite Jamboree. My idea in the interim is to locate in one of the clubs down there on Lower Broadway that has a stage.” 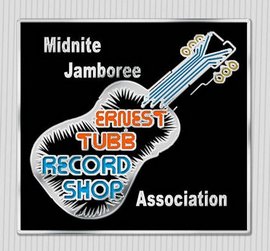 Also Glenn Douglas, along with a man named Ken Moser, have started the Midnite Jamboree Association hoping to solicit donations from fans of the radio show to help keep it afloat. There has also been some talk of attempting to get philanthropist and Studio ‘A’ savior Aubrey Preston involved. “Even with him, we still need the grassroots,” Glen explains. “We still need the people that love country music, and love the Midnite Jamboree. We need them to come on board and be a part of this and help us get this thing going and keep it going. I’m doing all I can here, which is not much. We need national and international exposure on this to let the world know.”

“It just broke my heart when David called me and said he had to suspend it,” Glen continues. “He didn’t want to say cancel it; he said suspend it. It is a suspension. It’s just off the air until he can find a place to put it back on. That’s another thing, we need money for WSM. He’s behind on his payment to them too. All of this is going to take money. The only thing we could figure out to do was to start this association. My friend Ken Mosher in Washington State, he is the guy that thought of this to start with, and he’s having all kinds of perks made up for the members, and he’s paying for it all out of his pocket, and not wanting a dime back.”

No different than other Nashville brick and mortar institutions such as Studio ‘A’, Studio ‘B’, The Ryman Auditorium, the Midnite Jamboree radio show is a national treasure that should be preserved.