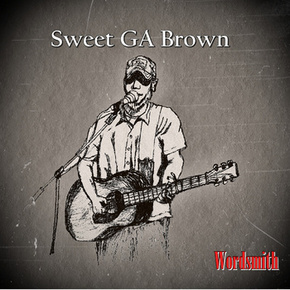 When this is the opening stanza to the opening song of an album, you may be safe to assume that you’re in store for a rambunctious and potentially lewd exploration of the human id in all of its glorious misbehaving malcontentedness. And in the case of Sweet GA Brown’s new album Wordsmith you would be right, at least partially. But you would be wrong to assume that this is all this self-described wordsmith has to offer in these 13 songs, and be surprised that amidst the salty language and brashness is one of the best-written albums so far this year, and one which is embedded with the virtues of simple wisdom, stretching all the way to a sincere spirituality that is as fulfilling as it is refreshing.

Though he may be a stranger to your ears, Sweet GA Brown has been slaving away at writing songs for years, and has released five complete albums and an EP since striking out as a solo artist in 2009. Aiding him in this 2014 effort is renown blues guitar player Husky Burnette and Dave “Burma Shave” Dowda on drums, but first and foremost this is a songwriter’s album that focuses on Brown’s words and melodies as he saws away on his acoustic guitar while whoever else happens to be around plays catch up. This is not a slick album by any stretch, but just like Dylan back in the day it really doesn’t matter. The audience is tasked to listen with their heart, and whatever imperfections may persist can be taken as character.

Sweet GA Brown is the real deal when it comes to songwriters—sweating under a blue collar all day to earn the right to sing in swill joints at night. His music emanates from the small town of Ringgold, GA just outside of Chattanooga; that’s the Georgia-Tennessee-Bama region that has seen the rise to other songwriters who like to cut their hard-hitting realism with humor like Roger Alan Wade. 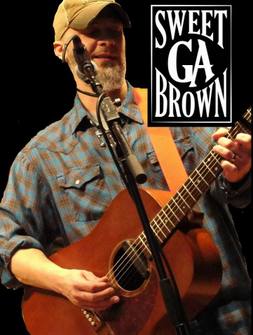 There’s a lot of Bob Dylan in Brown’s writing in the way he sometimes ambles and makes you think he’s going to lose his train of thought or not be able to pull off the next rhyme, only to prime you for a lyrical sucker punch whose welt remains well after the song is over. There is some Chris Knight in him in the respect of just being a simple guy living a simple life, and the simplicity in how his stories deliver their moral is what sets him apart. And Sweet GA Brown’s spirituality seems to underwrite everything he does, even when on the surface it may not seem as such, like how the opening stanza articulated above is really about how our demons are our undoing, and at every turn life is there to serve them to us on a silver platter.

With his Amish-style beard and a baseball cap bent over his eyes so you can barely see them, Sweet GA Brown can pull of a song like the uncensored “Wordsmith,” saying, “Some do it for the fame, some doing it for the riches, I’m just a motherfucking wordsmith … bitches. Well we all live in a yellow submarine, someone’s gotta clue me in on what the hell that means. ‘Cause I gotta get up in the morning and go to work.” Then with the very next song called “Cookie of Gold,” he comes across as brilliant and wise as an Asian proverb, only relayed in the endearing colloquial language of the American South.

As Wordsmith carries on, Sweet GA Brown’s spirituality is revealed when he sings a very humble and understated version of “Will The Circle Be Unbroken?” which then dovetails into one of the album’s best songs, “Don’t Curse God.” The way in which Brown first endears himself to you through poetry and humor allows him to delve into non-secular material without making you feel like you’re being preached to. This allows the message to become the most important thing to take away for the song as opposed to the vessel, making the songs inviting for both religious and non-religious listeners. And just to make sure this album doesn’t turn too serious, it concludes with a cover of Prince’s “Let’s Go Crazy” backed by the Pine Box Boys.

Sweet GA Brown and Wordsmith are a pleasant surprise and shouldn’t be frowned upon because of somewhat crude production, potty mouth language, and religious leanings. Within this music is the message of living life with a grin on your face and kindness in your heart, and no matter what your stripes, that’s a message that can resonate with all of us.