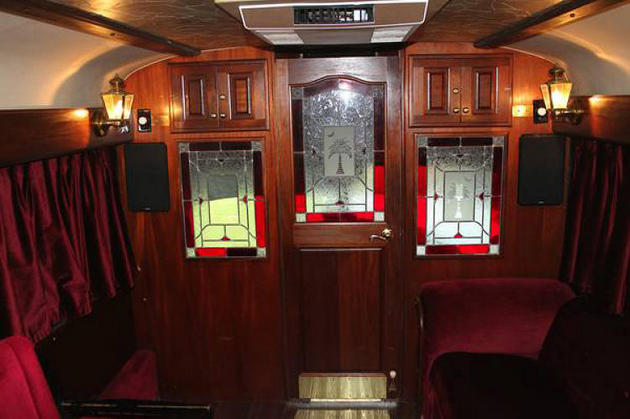 You may remember from early May when the sale of an old Willie Nelson tour bus on Craigslist erupted into its own viral event as pictures of the saloon-style interior with its custom wood paneling and crushed red velvet upholstery circled around the internet and a bidding war ensued for the piece of country music history. Originally nicknamed “Scout,” and later called “Me & Paul,” the 1983 Eagle tour bus was the rolling home for Willie Nelson’s long-time drummer and manager Paul English, purchased and customized with a Detroit Diesel engine, 3 separate rooms, a picture of Jimmie Rodgers and custom stained glass, and airbrushed designs on the sides and back.

The owner had purchased the bus three or four years before in Alabama and originally listed it on Craigslist for $29,999, hoping to at least recoup what he’d spent on his “hobby.” Eventually the bus sold for a whopping $80,000—gobbled up by a couple of private investors from Austin, TX. Taylor Perkins and Michael “Stix” Tashnick, one of which owns a company called Vintage Innovations that restores older vehicles and uses them for custom rentals, said they planned to restore the bus and use a portion of whatever proceeds to benefit Farm Aid.

“We are all huge Willie Nelson fans and have been our entire lives,” Taylor Perkins said at the time. “We felt this was a great way we could give something back to Willie, who has done so much for our state and the people in it.”

Now Taylor Perkins and Michael Tashnick have had their chance to restore and tastefully upgrade the bus, and it’s ready to serve as a fully immersive vintage country music experience for perspective renters. On the very first episode of Great American Country’s new show Celebrity Motor Homes that aired on November 26th, the “Me & Paul” bus was featured, giving country music enthusiasts an even more intimate glimpse into this piece of rolling piece of country lore.

Sorry GAC, I don’t think that rolling tray will see much “tobacco.”