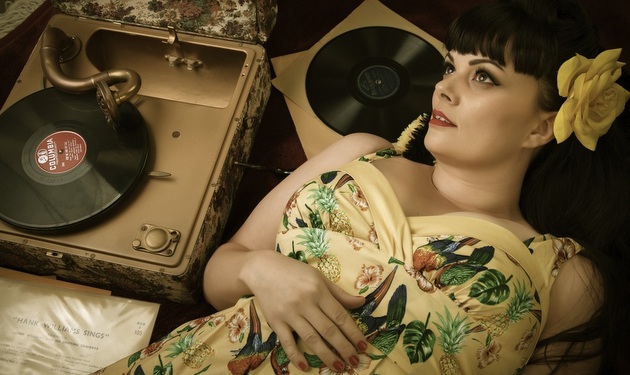 Alright, before we get too deep into this matter, just understand that you’re going to want to be purchasing this album. It’s my job to sit here and gab at you for a while about it and explain why, and I’m flattered that you would entertain this notion and read the proceeding words. But you pretty much just need to get this album and thank me later.

What I’m trying to impart to you here is this might be the best record released in 2014 by any artist whose last name doesn’t rhyme with Pimpson. Who’s even heard of Tami Neilson? I sure as hell hadn’t. But apparently she won the New Zealand Music Award for “Best Country Album” in 2009, 2010, and 2011. Who knew? Sorry, but by happenstance I let my dues to the New Zealand Music Association lapse in 2008 and they ceased sending me newsletters. But here we are in 2014, and I almost feel like I owe an apology to the sainted Saving Country Music reader for not cluing you in on Tami Neilson prior to this moment.

That’s right, New Zealand has country artists, and if you thought that the folks there only listened to the Lord of the Rings soundtrack on repeat, you’re sorely mistaken. Let’s not just summarily lump New Zealand in with Australian country music either, but truth be known, that entire quadrant of the globe deserves more credit for their country music contributions than it regularly gets. Rugged, rural country produces the sound of a strained heart that is universal in its appeal regardless of what hemisphere it originates in.

But it just happens to be that Tami Neilson originally originated from North America. And get this, she even has country music skins on the wall. Growing up in Canada, Tami played in the Neilson Family Band that toured regularly and even opened for Johnny Cash and others. More recently she’s played with Emmylou Harris and Pokey LaFarge. But let’s not pretend that Tami is one of these artists you have to associate with other more well-known names just to get you interested. Her music speaks for itself. 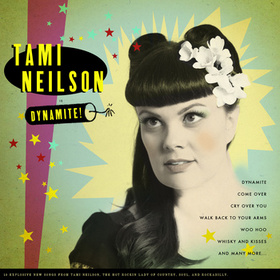 Your brain is going to want to file Tami Neilson into the rockabilly lobe initially because of the angry bangs she’s rocking on the album cover and the rockabilly-ish opening track “Walk (Back To Your Arms),” and no doubt there’s a healthy dollop of that old school rock and roll vibe in her sound. But country is the most resounding influence on her new record Dynamite! released in March, and quite honestly her offerings dwarf many, if not most of the contributions from artists residing in country music’s native geography.

Frankly, I’m a little intimidated about where to start raining praises on this record, but let’s begin with Tami’s voice. Like a country music genetic experiment gone good, Tami Neilson sounds like the result of Patsy Cline and Wanda Jackson having a baby. Blow off everything else if you wish, but Dynamite! might be the best vocal performance turned in for quite a while. The song “Cry Over You” is downright shiver inducing, and shows itself as a strong contender for Song of the Year.

That leads us into a discussion on the sheer style of Tami’s music. This is totally a country throwback old-school 1950’s record with no tone or sentiment offered foreign to this time, and no anachronism overlooked. At the same time the songs are timeless, speaking to the modern heart as universally as they would have if they were released 60+ years ago. A big hand needs to be given to producers Ben Edwards and Delaney Davidson, the latter known for touring the U.S. regularly with Possessed by Paul James. So many albums try to evoke the throwback sound with close approximations of vintage tones and by simply relying on tubes and tape instead of true interpretations of styles. Just like Tami’s singing, if nothing else, Dynamite! might be one of the best-produced albums in recent memory. And not just in the tones, but in the instrumental performances themselves—the arrangements, the classic electric guitar, the pedal steel and fiddle. It’s all so splendidly compiled and blended to inflict the intended mood.

But you know how modern country fans love to complain about music that sounds just like grandpa’s. That’s where Tami Neilson’s songwriting comes in, making Dynamite! so much more than just a cool nostalgia record. Like any good country album, there’s moments where the songs simply pound at your emotional capacitors and make you relent; songs like “You Lie,” “Running To You,” and “Whiskey and Kisses.” Take these songs and overlay them with a hip-hop beat and they would still work brilliantly. Yes, there’s a lot of interpretation of style instead of originality on this album with songs like “Texas” that could have been ripped out of Patsy Cline’s song chronology, or “Woo Hoo,” which is just fun silliness. But a song like “Running To You” exhibits a lot of deep compositional brilliance.

There may be some songs here that are just simply fun, but there’s not a slouch in the entire bunch. And this album goes by so fast, like a succulent daydream you wake up too early from and try to fall back asleep to recapture. Luckily this isn’t 1954 and we have the aid of a repeat button.

Can’t say enough here. This is a good one, and a late edition to the albums that are being considered as the best in country music in 2014.

Now if you’ll excuse me, I’m off to delve into the rest of her catalog.