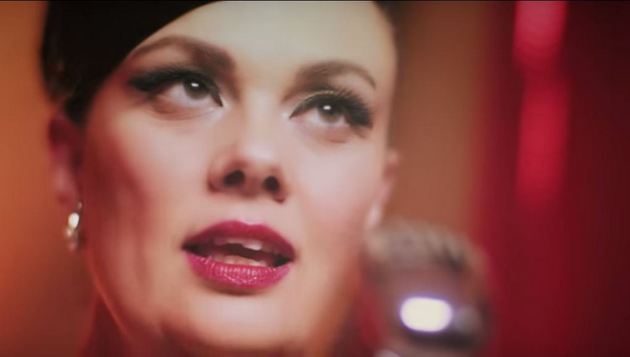 Tami Neilson is the Canadian-born, New Zealand-living songstress and singer who sent reverberating shock waves all throughout the Saving Country Music sphere of influence in 2014 with the release of her roots music masterpiece Dynamite! The album was only bested by Sturgill Simpson’s opus Metamodern Sounds in Country Music for SCM’s Album of the Year in 2014, and now she is set to release her follow up called Don’t Be Afraid September 25th (UPDATE: Will not be out in the United States until sometime in 2016). Ahead of the new record, Tami has released the first single and video called “Lonely.”

READ: Tami Neilson, Dynamite From Down Under! (Interview)

“Lonely” is no ordinary song. In February of 2015, Tami’s father, Ron Neilson, passed away. Tami grew up performing in a family band with her father and the rest of her family, touring throughout Canada and the United States, even opening for Johnny Cash and other notable country stars along the way. Ron Neilson began writing “Lonely” in 1972, and recorded a demo for it outside a hotel room while on tour in Canada. Yet he didn’t share or finish the song; it just remained a recorded demo forgotten in time until Tami and her brother Jay discovered the demo a week after his passing.

With the grief and loss still weighing heavy in their minds and hearts, Tami and Jay Neilson completed their father’s song, and Tami recorded it for her new album, releasing the song and the video on her father’s birthday.

“I guess my first idol was my dad. He’s a musical giant for me,” Tami said in a recent interview (see below). “When I first came back [to New Zealand], it was only a month after dad had passed away, and I’d written most or all of the songs for the album, and we were recording six weeks after he died. It was already all booked in. But of course the album ended up being a very different thing than originally thought.”

“Lonely” operates in the classic Countrypolitan style indicative of Patsy Cline, where the sweet spot of Tami Neilson’s style can be found. The song enacts a slow build, which rewards listeners for their patience by delivering the best moments at the end, especially when Tami’s voice is allowed to soar. Though “Lonely” isn’t the ideal display for Tami’s vocal capabilities because of its lower register, the emotion captured on the track from the back story and the personal nature of the song still allow the performance to rise into the memorable category.

Tami Neilson is like the Adele of country music, and the remoteness of her base of operations shouldn’t impinge on her music’s ability to touch and entertain country and classic pop audiences across North America and beyond.

Tami Neilson also participated in a hilarious and informative interview with Anika Moa of the New Zealand Herald recently. If anything, it’s worth waiting until the end to hear Tami sing.