Tanya Tucker Is Ticked That Country Grammys Were Not Televised 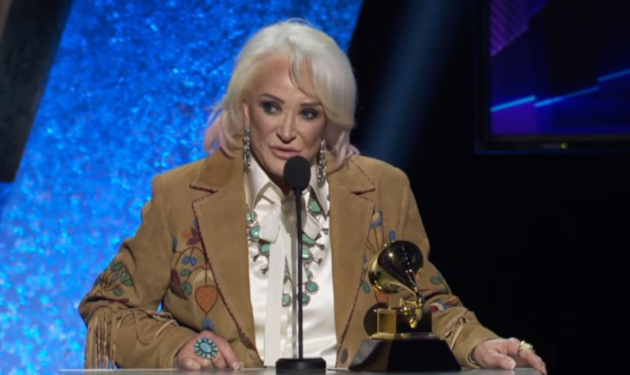 Truth be told, Tanya Tucker cleaned up at the 2020 Grammy Awards, winning the two biggest honors bestowed to country artists: Best Country Album for her comeback record While I’m Livin’, and Best Country Song for “Bring My Flowers Now.” The wins were the first for Tanya after first being nominated 47 years ago, and receiving 10 more nominations before finally winning.

“After 50 years in this business, and it’s still unbelievable to me that I still have a few firsts left. So after 14 trips, 14 nominations, this is the first win, and I can’t believe it,” Tanya Tucker said after winning for Best Country Song. “I just want to say that no matter how young or old you are, never stop following your dreams. Keep going.”

But the only way you heard Tanya’s two acceptance speeches is if you were signed into the streaming feed of the Grammy’s “Premier Ceremony,” which transpires hours before the actual Grammy Awards broadcast on CBS. Granted, it’s very understandable why not all the awards are handed out on national television. With 84 total Grammy categories, there is just no way you can televise them all. But usually, either Best Country Song, or Best Country Album is saved for the telecast.

Instead in 2020, producers moved Best Country Duo or Group Performance to the televised portion so that Dan + Shay could get the screen time for their win for “Speechless.” Willie Nelson’s win with “Ride Me Back Home” for Best Country Solo Performance was also handed out during the earlier Premier Ceremony.

“We deserve to be on national television just like everybody else,” Tanya Tucker told the New York Post recently, not just about her wins, but the other country categories as well. “It’s just not right, and we need to change that. I love to sing all kinds of music but country music will always be my first love. That will always be my real bitch with the Grammys.”

This is not the first time the Grammy Awards have rearranged things last minute and relegated a country winner to the Premier Ceremony. “I guess the revolution will not be televised,” was Sturgill Simpson’s response when he won Best Country Album in 2017 for A Sailor’s Guide to Earth. Even though he was also up for the all-genre Album of the Year, Grammy producers didn’t think Simpson had enough name recognition to accept his award in prime time.

However both Sturgill and Tanya Tucker were given prime time performance slots. Sturgill received a big Grammy boost in sales after the awards, as did Tanya, especially her song “Bring My Flowers Now,” which she performed with producer Brandi Carlile. After the win, Tucker made her first appearance on the Billboard Hot Country Songs chart in 17 years. “Bring My Flowers Now” showed up this week at #47.

And Tanya Tucker did actually receive an award on the telecast, though it wasn’t one of hers. Tucker was part of the tandem that handed out the “Best Comedy Album” to Dave Chapelle, but since Chapelle wasn’t in attendance, Tucker accepted it on his behalf. Usually Best Comedy Album is done during the Premier Ceremony as well.

Tanya isn’t resting on her laurels after her wins though. She’s getting to work. “We ain’t gonna sit around and rest. That’s when the shit will really hit the fan! I would have liked to have had a few more days to walk on the beach, but it’s back to the bus, back to the road, which is really what starts all that Grammy stuff off, you know. It’s where the nucleus of it really is. I’m going back to the one that brung me! (Laughs.)”