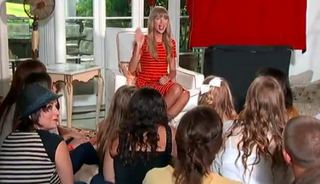 On Monday (8-12), Taylor Swift had a live press conference via the miracle of YouTube and Google+ where she announced she will be releasing her new album entitled Red on October 22nd, and that it would include a whopping 16 songs. Flanked by glitterfaced girls who made the trek to Nashville from all different parts of the country, the only thing that would have made a mid-30’s male music journalist feel more like a pedophile peering into this press conference was if a pillow fight had broken out.

Whether we like it or not, and no matter how much some people may or may not care, Taylor Swift is the biggest name in country music right now, and how her music goes, so can go the entire genre. The hints of what Taylor Swift had in store for her new album were subtle, but seemed to be leaning towards a maturing of her music. She talked openly about how it would be a “darker” album. And then she collaborated with The Civil Wars and played a show with James Taylor, and it seemed as if Taylor’s winsome style might disappear like the curls that marked her teenage years.

Maybe Taylor would even do something bold, attempt to lead sonically or set the trends instead of trying to reside safely within them. After all, she does write her own material, produce her own records, can actually play instruments, and is such a great role model for youth. Even the starkness and depth of the “Red” title, and how she talked to her fans in the press conference about how she was happy that words and songwriting were important to them, and just the sheer number of songs the album included set us up for feeling like we were on the verge of something audacious. 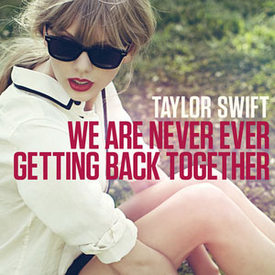 And then she premiered the first single from the album “We Are Never Ever Getting Back Together” and even the most devout Taylor Swift apologists were reminded very starkly that Taylor Swift is just a pop star.

“We Are Never Getting Back Together” is as saccharine as any Taylor Swift selection, and rivals any of her songs for being the most pop. From an artist that has shied away from voice enhancements and digital treatments, there’s something automated going on here, though I’m not confident enough to level the charge of Auto-tune. “We Are Never…” is ultra-catchy, I mean I was humming this dumb thing hours after Taylor’s fluffy presser had gone off air; so catchy that any type of redeeming creative content in the song is rendered benign. But again, any expectations lumped on her first new single were probably going to be disappointed unless your goal was to procure new material to lip-sync to with your shampoo bottle in front of a full-length mirror.

And to be fair, this is just one song. There’s 15 more coming, and some bonus tracks. In fact I wonder why Taylor didn’t just release a few more and bump Red up to a full-blown double album. And this leads me to the train of thought I was on about Taylor before her press conference: that she is starving for radio play. 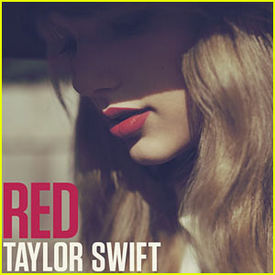 As successful as Taylor Swift and her last album Speak Now have been, the radio play from the album was downright anemic. In fact before the release of “We Are Never…” the Swift material you were likely to hear randomly while at the grocery store or in a friends car was from her first two albums, not Speak Now. Her harshest critics will never admit this, but Speak Now was very mature for a pop album, and for Taylor Swift. The songs were just too long for radio play. There wasn’t a song on Speak Now that clocked under 3 1/2 minutes, 11 of the 14 songs clocked in at or over 4 minutes, 5 of them clocked in at over 5 minutes, and two at over 6 minutes. That’s unheard of in pop/radio play music.

Even though Taylor is/was unarguably the hottest thing in country, none of the first four singles from Speak Now made it to #1, including the notorious “Mean” which won two Grammy’s. It was only the 5th single “Sparks Fly” that hit #1, and only briefly. And for the last few months, country radio has been free of any Swift singles. Compare this to Swift’s closest commercial rival, Jason Aldean, whose My Kinda Party album had 3 #1 singles, and two songs top out at #2, and Aldean immediately began releasing singles from the new album after the old one was singled out. That’s what you can do when nearly every song is under 4 minutes.

So am I surprised when Taylor’s lead single is the most radio-friendly 3-minute pop-eriffic thing she’s done since her second album Fearless? Not at all. I’m also not surprised that Taylor went back to using co-writers as opposed to writing all the material herself like she did with Speak Now. Taylor needed a hit single to keep her music queen status fresh. I do think that Taylor wants to be regarded as creative, authentic, and autonomous. But she also wants to be successful, and that is why “We Are Never Ever Getting Back Together” won out as the lead single.

As for what Taylor’s Red album will eventually reveal itself as, we’ll have to wait and see, but I wouldn’t be surprised if “We Are Never…” is the album’s most vapid offering, or that it becomes a #1.

James Taylor, Red, Taylor Swift, The Civil Wars, We Are Never Ever Getting Back Together